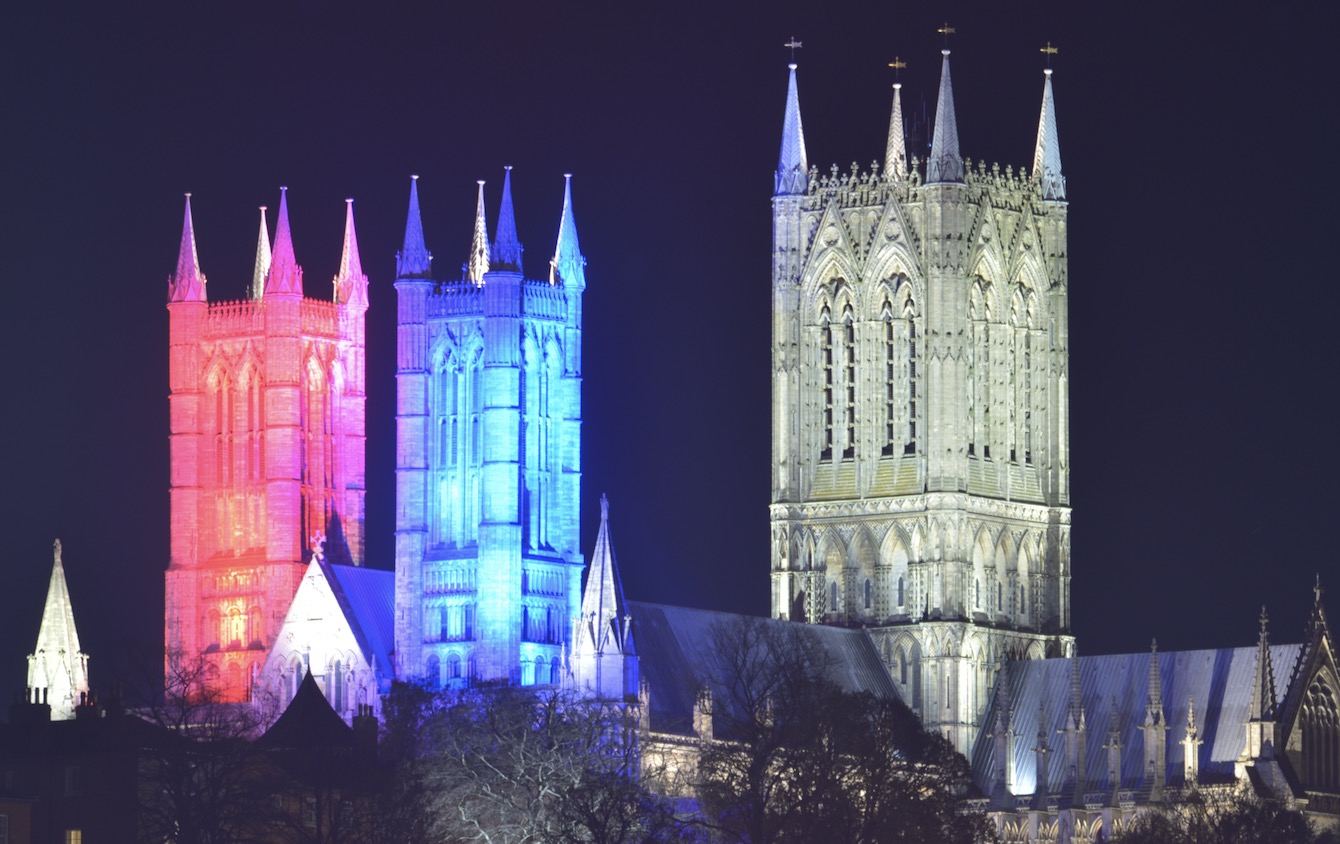 Prayers, silence, pipers and picnics, an organ recital of “We’ll Meet Again”, a recording made from onboard HMS Albion – and turning red, white and blue – this is how cathedrals are marking VE Day in lockdown.

Although the country cannot come together to commemorate the 75th Anniversary of VE Day, Church of England cathedrals are paying tribute to the many millions at home and abroad who sacrificed so much to bring peace to Europe 75 years ago in creative digital ways.

Lincoln and Guildford cathedrals both plan to be lit up red, white and blue this Friday, Durham’s organist will play We’ll Meet Again from the comfort of his own home to help all those wanting to join in the nation’s sing-along at 9pm, BBC 1’s Sunday worship service for VE Day will come from Hereford Cathedral, and more than 20 cathedrals are inviting individual households to take part in a Big Picnic for Hope, by holding a sponsored picnic to honour the service and sacrifice of the wartime generation and raise funds for those in need during this current crisis.

The Archbishop of York will speak at a virtual VE Day service from Ripon Cathedral at 11am on Friday May 8.

The service for North Yorkshire will include readings from civic and regional leaders, prayers from the Dean of York and a special anthem version of Abide With Me recorded in lockdown by the Dishforth Military Wives Choir especially for the service.

A Civic VE Day service has been pre-recorded by The Lord Mayor of Chester, the chairman of Cheshire West and Chester Council and Chester Cathedral which includes Military Personnel, local dignitaries, clergy and school children who have all contributed to the short service from their personal locations, including on board HMS Albion and will be available to view on May 8.

St Albans will be streaming a special service of thanksgiving including contributions from some of those who took part in the struggles of WW2.

Durham Cathedral will broadcast a pre-recorded service through Facebook and there will be prayers in the Remembrance Garden; Portsmouth Cathedral’s service will take place at 11am on its YouTube channel and will include readings, music and an Act of Commitment with serving members of the Armed Forces, Her Majesty’s Lord-Lieutenant of Hampshire, The Lord Mayor of Portsmouth, The Dean of Portsmouth, The Chaplain of the Fleet and Archdeacon for the Royal Navy and The Bishop of Portsmouth.

Norwich Cathedral will publish its Service of Thanksgiving, Rededication and Hope on its YouTube Channel on Sunday 10 May with contributions from General the Lord Dannatt, a former head of the British Army, a Second World War veteran, and some young people.

Leicester Cathedral will celebrate the anniversary on Friday with a pre-recorded service at 12noon with key members of its civic and diocesan life.

Exeter is hoping to create a digital memory board, Winchester Cathedral will be offering a special VE Day act of worship on Friday through its website, Worcester will mark the two minute silence live on Facebook at 11am followed by prayers and the Act of Commitment.

Bristol will broadcast its service at midday on Friday with a wide range of readings and addresses and music from the choir recorded before lockdown.

Bradford Cathedral will share messages of peace inspired by the inscriptions written on the ten World War 1 memorial bells in its bell tower. Bradford will also share footage from original VE Day events in Bradford, has a range of arts and crafts activities for families and will stream a service online at 3pm. Wakefield will share its service at 1pm.

Peterborough Cathedral’s online VE Day Commemoration Service will take place at 3pm with reflections, pre-recorded music from the choir and the Last Post played by a student at The King’s School.

“Although the service cannot be in the format that we had originally planned, we shall gather joyfully and with thanksgiving, like those who gathered on that first VE Day, grateful for all that binds us together, even in times of sadness and loss and praying for the courage and imagination to overcome our current difficulties.”

Coventry which was destroyed by German bombs on November 14 1940 during a 10-hour bombing raid that left 500 people dead, 2,300 homes destroyed and the city’s medieval cathedral a shell, is now a site of reconciliation and remembrance. And it will use its litany of reconciliation for an online service at 12 noon.

The Dean of Coventry will join members of the Community of the Cross of Nails, an organisation committed to reconciliation that grew out of the ruins of the old cathedral, in Germany on the anniversary to say the litany at 11am their time.

Wells Cathedral will release a VE Day Thanksgiving Commemoration video at 5.15pm on its social media pages. This will include an introduction, prayer and blessing from the Dean a reading by a Girl Chorister who lives on Vicars’ Close in Wells and a rendition of Jerusalem by Wells Cathedral Choir, recorded as part of the BBC’s ‘Adventures into music’ programme with former Police drummer, Stuart Copeland earlier this year.

And Westminster Abbey will release a special podcast with a mix of sermon, service and reflections to mark the anniversary at 9am on Friday.

More than 20 Church of England cathedrals are inviting people to stay home and join a Big Picnic for Hope on VE Day.

A special website has been set up for individual households to “share” their picnic online and participants are being encouraged to use social media to tweet their plans, ideas and recipes as well as their picnic pictures on the day to create a sense of togetherness this Bank Holiday and to give what they can to those who are struggling to feed themselves during this pandemic.

Cathedrals want the Big Picnic for Hope to raise £5,000 for The Trussell Trust, a charity that supports a network of foodbanks in the UK, as well as encourage donations to other local foodbanks too.

Leicester Cathedral, which is one of the cathedrals taking part in the Big Picnic, has gone one step further by asking people to join in a Big Bake of Hope too by baking a sweet treat, “sharing” it at the cathedral’s virtual community coffee morning on Saturday 9 May and then “donating” their favourite cake recipe to create the Community Big Bake recipe book which will be sold to also raise funds for The Trussell Trust.

The Very Revd Adrian Dorber, who chairs the Association of English Cathedrals, said:

“While big public plans for celebrating the 75th anniversary of VE day 2020 have been put on hold, it seems appropriate to use this date to remember the experience of World War II and to think about the humanity and care we have seen right now.

“This pandemic has inspired a different national mood; the selflessness and dedication shown by our NHS and all frontline workers; the great neighbourliness, the practical support and care for one another.

“The aim of the Big Picnic for Hope is to have a shared occasion, but the project also provides an opportunity for us to recognise that these are difficult times for many people and that we can all play our part in this by giving what we can.” 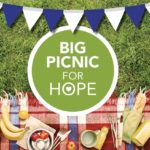 You can view the Order of Service for the VE Day 1945 service which took place at Westminster Abbey on the Church of England’s website.