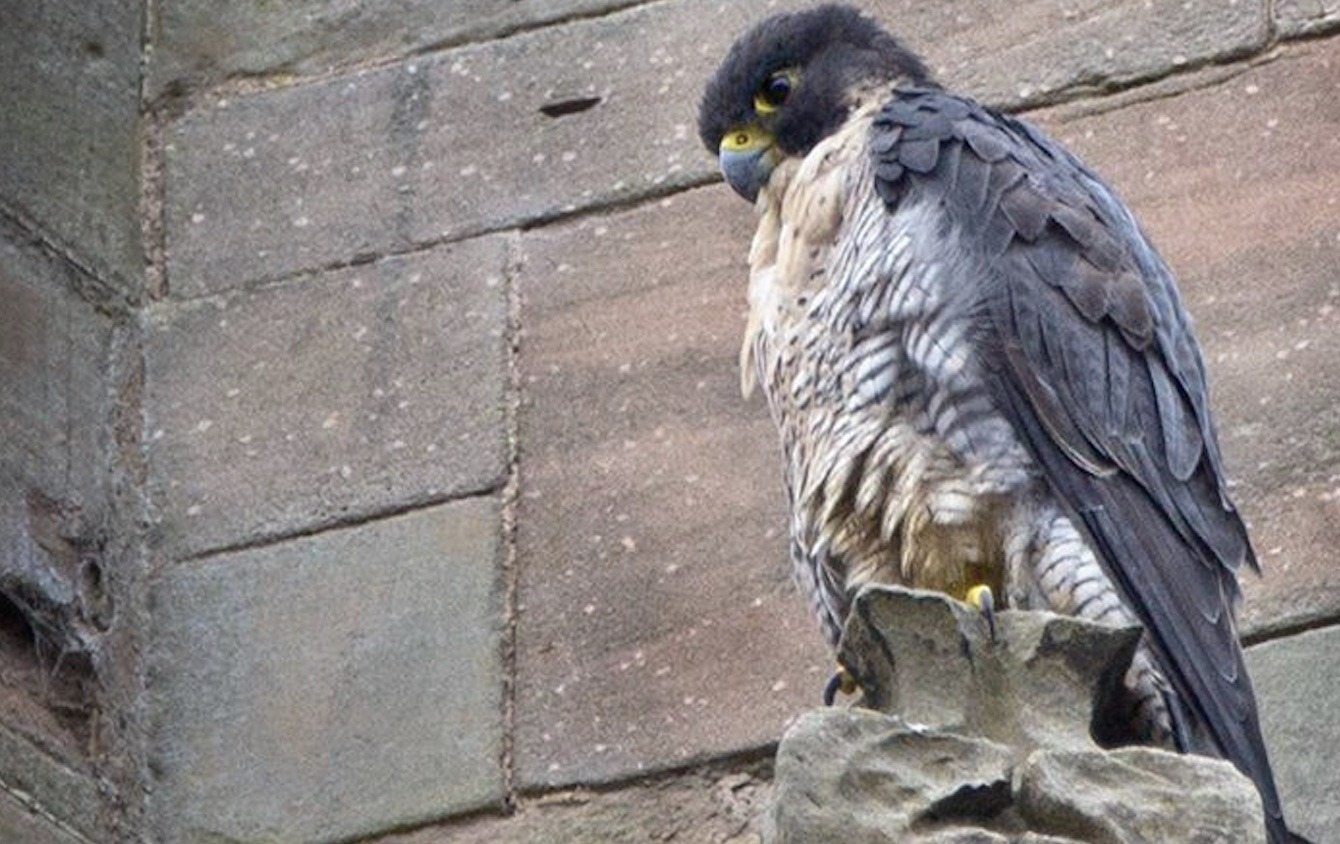 Your regular update on the egg laying progress of peregrine falcons nesting at cathedrals across the country.

It’s all eyes on Derby this year after the Cathedral Peregrine Project announced its webcams were back up and running– and they had four eggs!

After a couple of years without connectivity, Derby’s Cathedral Peregrine Project is super pleased to be able to offer their breeding pair to the watching world with live web cam footage and embedded video. 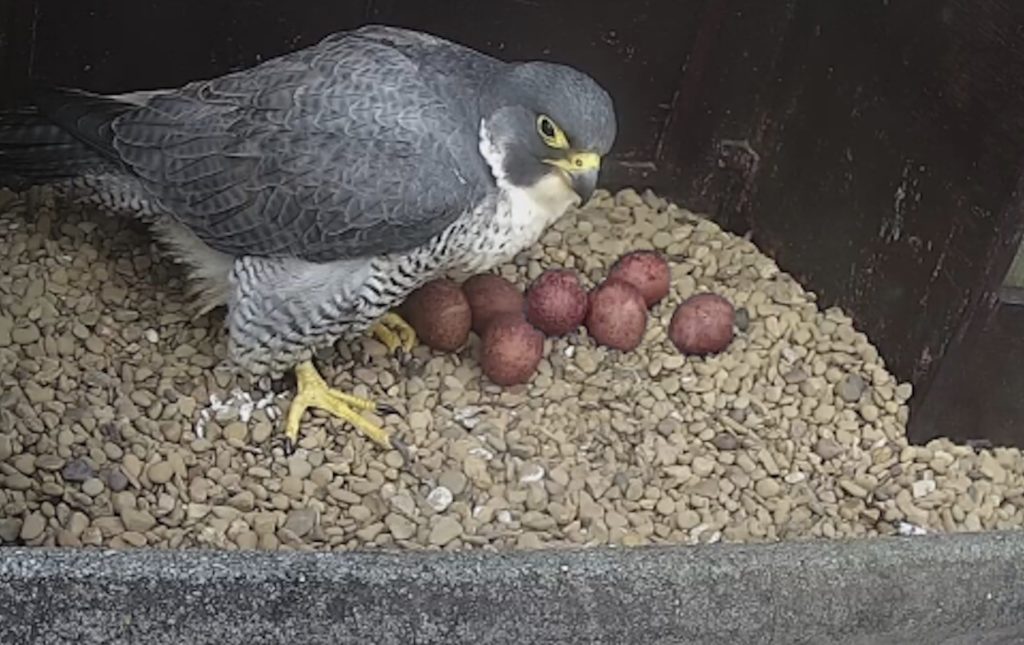 Derby, like Chichester, were one of the first cathedrals in the UK to have peregrines – the birds turned up in 2005 and one year later, a platform was installed and they nested almost immediately, successfully rearing three young.

They have reared young every year, apart from last year when they lost their (very old) female and a new pair didn’t form in time.

You can catch up with the Derby cathedral peregrines here.

Four seems to be the number this year, with Salisbury, Winchester and Norwich all declaring they currently have four eggs.

Wakefield has two, you can keep up to date with the Wakefield Peregrine project here.

Norwich is run by the Hawk and Owl Trust.

And you can find out all you need to know about Salisbury cathedral’s pair here, plus there’s educational activities available for the first time too.

And we’re still awaiting news on Lincoln’s urban peregrines who tend to lay later than the other UK peregrines – often around the end week in March.

A spokesperson for Lincoln Cathedral said the adult female had been spending some time digging her scrape last week– so it could be any time now.

“Two eggs were laid in 2020, but neither of them hatched, so we’re hoping for better news this year,” she added.

Lincoln’s female is at least 15 years old, and is on her second or third mate. She has successfully raised 35 chicks since records began in 2007. Two eggs were laid in 2020, but neither of them hatched. We hope for better news in 2021!

Similarly there are no eggs at Chichester yet. Chichester Cathedral’s peregrine falcons have been sighted making themselves at home on the Spire. They’ve been going to the nesting box, but no mating activity yet! 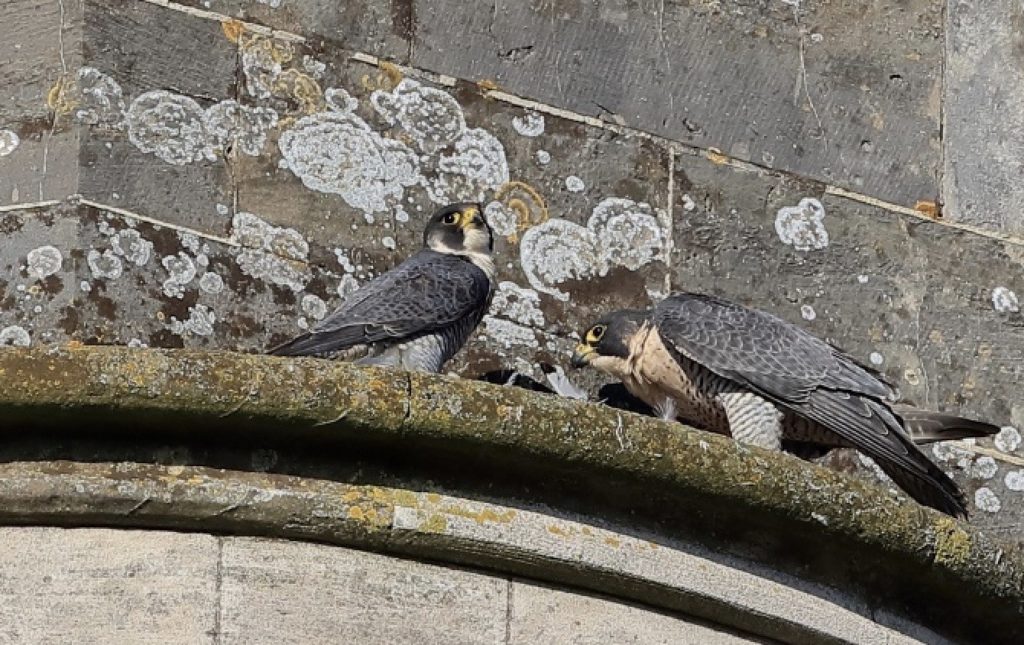 Peregrines were first seen on Chichester Cathedral’s tower in the mid-1990s and have fledged more than 60 chicks since 2001. This year it appears that the female, who has been in residence before with her partner, Maverick, with whom she has raised eight chicks in the last two years, has a new younger male on the scene and poor Maverick has not been seen since Christmas Eve.

The peregrine project is run jointly by Chichester Cathedral, the Sussex Ornithological Society (SOS) and local wildlife enthusiasts David and Janet Shaw who have been observing the birds since 2001.

They have installed a new nest box this year and you can follow the peregrines’ progress from the webcam installed in the nesting site by Carnyx TV here.

At Winchester, their resident female Winnie is now incubating her four eggs and Keith Betton, from the Hampshire Ornithological Society who is closely monitoring the cameras, said for the next month she will barely leave the nest.

He expects the hatch date to be somewhere around 22/23 April.

Catch up with the Winchester Cathedral Peregrine diary here.

The peregrines at Worcester are harder to keep tabs on, there is no tray or cameras available there, and the present nest site is natural and of the birds choosing.

But Darren Steele, Works Manager and Master Mason at Worcester, thinks a pair may have started nesting in the north east pinnacle again similar to their activity in 2020. He reports that there has been significant peregrine activity and the male has been providing food for the female which he says, is a promising sign.