Chichester, Wakefield, Lincoln, Winchester, Salisbury, Norwich, Leicester, Derby, and Worcester Cathedral – all have peregrine falcon visitors. And here are the links to the webcams where you can watch them live.

Over the last few weeks, resident females have been ousted, eggs have been laid, chicks have hatched and food has been dispatched before our very eyes as live camera action gives us an insight into the breeding lives of these magnificent birds of prey without interfering with the process.

Chichester Cathedral was the first in Europe to employ webcam technology and this week saw three of their four eggs hatch. Since 2001 a pair of peregrine falcons have raised their new chicks in the Cathedral’s south east turret and have fledged more than 60 chicks in total.

Cliff-dwelling peregrines almost became extinct in Britain during the last century due to the use of pesticides and have more recently re-invented themselves as city dwellers, using tall urban structures to replicate their natural nesting habitat.

About 1,505 breeding pairs currently live in the UK according to the British Trust for Ornithology survey in 2014. It’s 2002 study showed peregrines living at 62 manmade structures including one urban nesting site recorded as far back as the mid-19th Century – Salisbury Cathedral.

Cathedrals are a favourite home for these high-flying raptors who are loyal to their nesting sites with Wakefield, Lincoln, Winchester, Salisbury, Norwich, Leicester, Derby, Worcester and Chichester all offering sites for them – and most working with their local ornithologists or RSPB branches to provide web cam links.

Peregrine falcons have been nesting in Lincoln’s central Bell Tower for more than a decade and have raised at least 27 young. A new collaboration between the cathedral, the University of Lincoln and wireless internet provider, Quickline this year means there’s now a live feed available of the peregrines.

Lincoln Cathedral’s Business Development Manager, Samantha Mellows, said, “We have been home to peregrines for the last 13 years. Visitors hoping to catch a glimpse of the pair and their chicks have had to rely somewhat on good luck to spot these incredible birds up to now, so we are very pleased to partner with the University of Lincoln and Quickline to enable people to see them up close.

You can see Lincoln’s peregrine’s on this link.

Winchester Cathedral has installed a new web-cam to monitor the movements of its resident Peregrines, which have returned to the Cathedral for a third year in a row after their home of six years – an old Police HQ – was demolished in 2016 .

A live link on the Cathedral website gives members of the public the opportunity to follow the progress of the peregrines and helps the Hampshire Ornithological Society track their behaviour.

You can view the web-cam at here

A webcam for the peregrines was installed in Wakefield Cathedral in time for the 2016 breeding season and live images from the nestbox of the adults and four juveniles were streamed to the internet for the first time in May 2016.

In 2018 a second webcam was installed that shows live footage of peregrine activity on the east parapet near the nestbox.

Salisbury found themselves with a new nesting pair after the resident female – Sally ringed and GPS tagged – was ousted from her nest on the Cathedral Tower and last seen outside Harnham. Sally had become a star after appearing on BBC’s Springwatch last year when she raised an orphaned chick along with her own. Now the new nesting pair are incubating four eggs – hatching is expected in mid May.

The Salisbury Peregrine webcam is not live at the moment, but you can see them on YouTube here.

Chichester is offering a series of Open Days providing the opportunity to observe the peregrines through a telescope, watch the webcam footage, and learn more about the birds and their activities from volunteers on site. The dates are May 18/19; June 8/9; June 15/16 and June 22/23 – from 10am to 4pm.

There are generally around 3 to 4 eggs in a clutch and incubation doesn’t start until the last egg is laid. Incubation lasts 29 to 32 days, with the nesting pair sharing egg duty and hunting.

Norwich Cathedral had four eggs this year, all hatched but only 3 chicks survive. But according to the Hawk and Owl Trust they are all doing very well.

The Peregrine Project Team at Derby, supported by Derbyshire Wildlife Trust, Derby Cathedral and Derby City Council have reported the peregrines are back on Derby Cathedral Tower this year.

They have been undertaking routine maintenance work and are looking for alternative ways to find a better wireless connection to try and get back on stream and have asked for people’s patience this year – but promise to be back!! 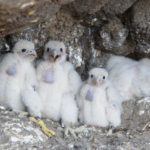