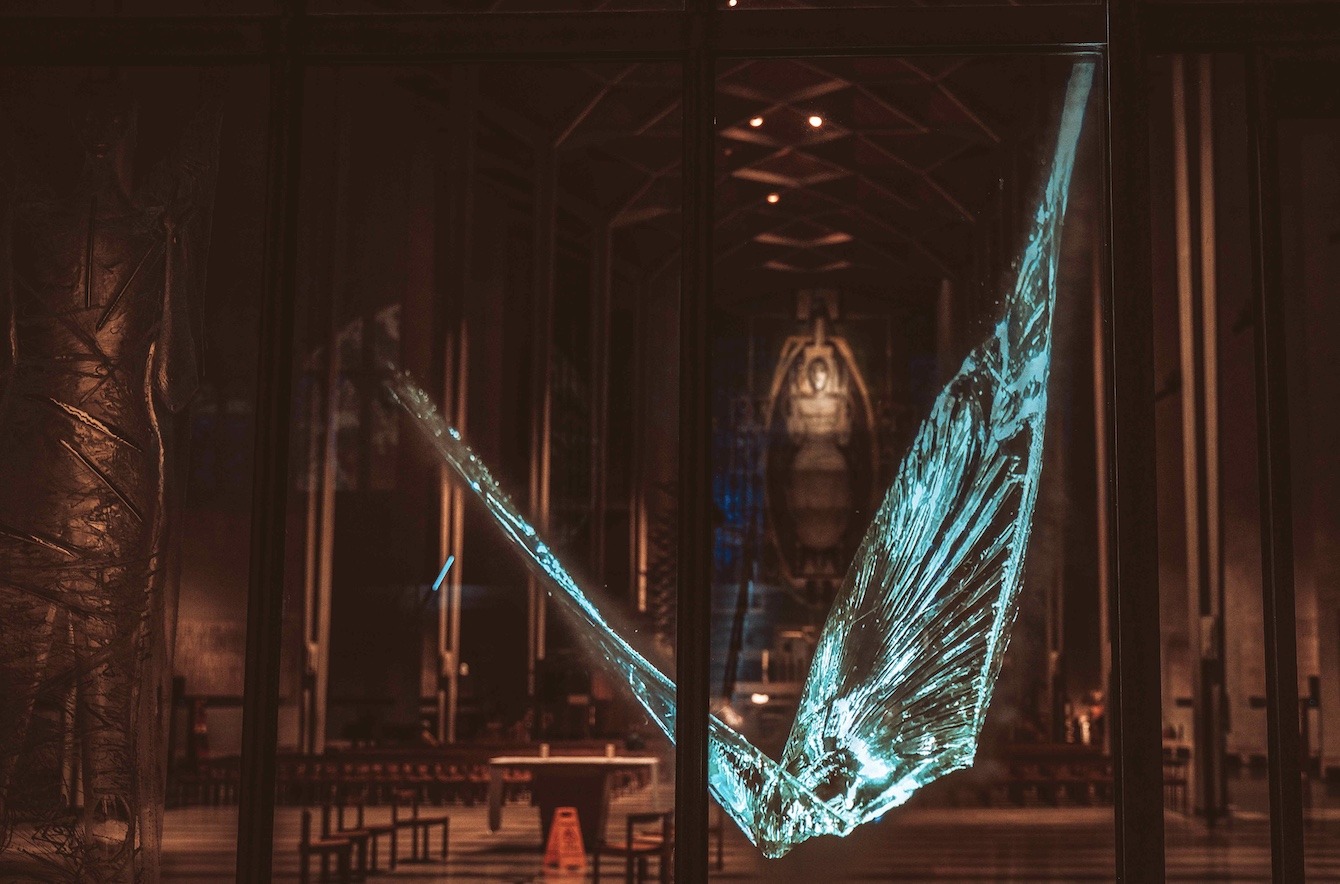 New artwork has just been revealed that will temporarily replace the Angel of the Eternal Gospel at Coventry Cathedral that was destroyed by vandalism last year.

It will remain on display until February 2022 when it will be replaced by the next commission.

Petters has made two related works Lichtung – Break in which a piece of broken window glass from the West Screen, both magnifies and projects onto the now blank window where the Angel of the Eternal Gospel used to be and Lichtung – White Drift which is located nearby.

‘Lichtung’ is a German word that is impossible to translate exactly. It is often translated as ‘clearing’, but its root is ‘Licht’, the word for ‘light’. The apparition takes the form of an abstract image of a glass fragment, bringing new light into the empty space. It responds directly to the destruction of the glass, as well as Coventry Cathedral’s mission of peace and reconciliation.

Anne Petters uses glass, light and natural phenomena to make objects and installations that create a sense of wonder and curiosity in the viewer. Her work challenges our ideas of fragility and the passage of time.

She describes her practice as “an attempt to visualise and materialise the poetic spiritual space of the everyday”.

Petters‘ home city of Dresden was twinned with Coventry in recognition of the destruction of both cities following end of WW2. She has drawn on the deep emotional connection between the histories of the two cities in the creation of her work.

The West Screen’s original engravings were created over a decade by John Hutton, who created entirely new glass-engraving technique in the process. They were commissioned by the Cathedral’s architect Sir Basil Spence. When Hutton died in 1978 his ashes were buried at the foot of the window, beneath the position of where the ‘Angel of the Eternal Gospel’ stood.

The West Screen is one of the many masterpieces created for the new Cathedral, which include works by John Piper, Graham Sutherland, Jacob Epstein, Lawrence Lee, Geoffrey Clark and Hans Coper. The Cathedral will celebrate the 60th anniversary of its consecration in January 2022.

“I remember standing in front of the cathedral’s West Screen for the first time in 2016, overwhelmed by Hutton’s unique and dynamic way of cutting into glass. Having worked with glass for 15 years at the time my emotional reaction was quite intense, I could firmly hear the sound of grinding into glass and sense the physical effort that would go into an art work like this. The massive West Screen for me is not only overwhelming in its beauty, it also feels dangerous, almost threatening, but fragile at the same time, an attribute which is always inherent in the material glass. It is a huge honour and a great joy to be presenting Lichtung – Break / Lichtung – White Drift in this space.”

“When our original Angel came down, the smashing glass made a devastating sound as it resonated around our Cathedral. Through Broken Angel, starting with this wonderful work by Anne Petters, we seek a creative response to this act of violence and further our 60 year tradition of working with artists as part of our reconciliation work. It’s our own poetic, spiritual Fourth Plinth.”

“The old Cathedral was one of the glorious buildings destroyed in the Blitz and when Basil Spence, was commissioned to design the new cathedral, artists were always part of the story weaving creativity through the architecture of the Cathedral.  Artists have provided rich storytelling through sculptures, tapestries, artworks and in the incredible windows.  This latest creative project is extraordinary in its concept, Coventry moving acts of destruction into hope.”

“Creativity can be a powerful way for people to express themselves and to explore the world around them from a different perspective, so we’re pleased to be supporting the Broken Angel project and look forward to seeing these creative responses to an act of vandalism.

“In Coventry’s year as City of Culture, it’s great to see opportunities for the local community to come together to experience great art and culture in a venue as iconic as Coventry Cathedral.”

The West Screen Angel of the Eternal Gospel was smashed by thieves in the early hours of Friday 24th January 2020. 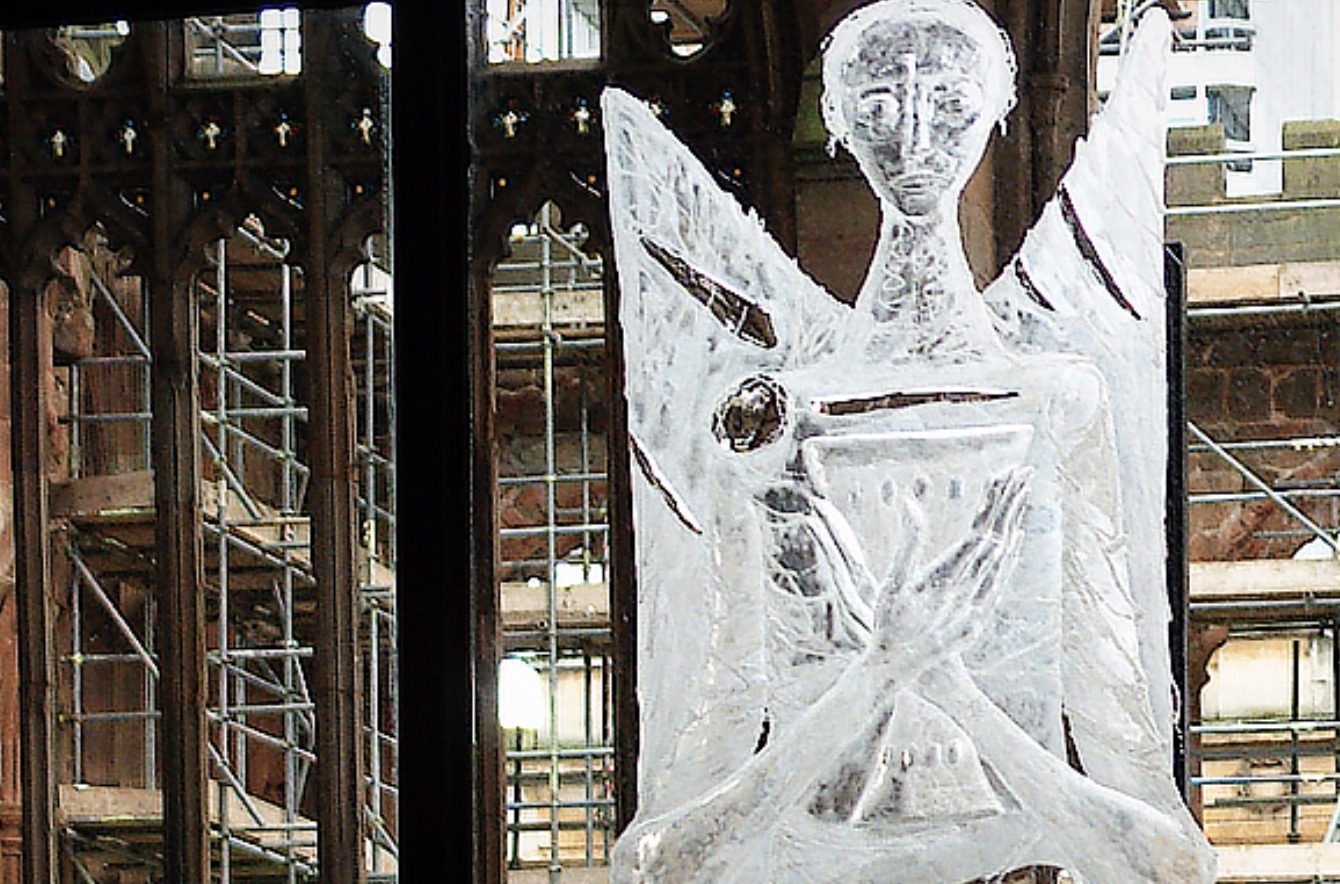