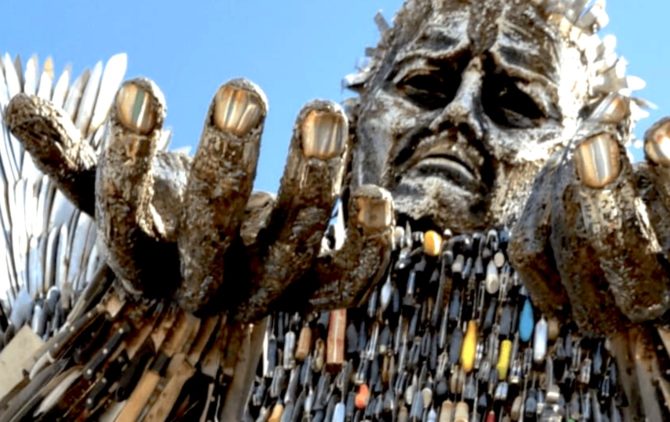 Where did your summer holiday take you? Lots of people have been taking the opportunity to #DiscoverCathedrals.

Hundreds of thousands of you have used your summer holiday to visit our cathedrals for a host of art exhibitions, tours, family activities or simply just to be.

And after a year like no other … We Thank You!

Our latest economic and social impact report just published showed that in 2019 we hosted two events EVERY three days – that’s a massive 9,580 events – and we welcomed 14.6million visitors – including 308,000 schoolchildren.

The pandemic had a huge impact on our visitor numbers and our ability to host events – 2020 saw visits down by 75 per cent and we hosted just 885 events.

But we’re building back!

Early analysis from the team that brought the Knife Angel sculpture to Hereford Cathedral shows that at least 102,000 people visited this contemporary sculpture during its four week stay this summer.

The 27 ft tall Knife Angel, also known as the National Monument Against Violence and Aggression, became a focal point for visitors to the city. Nearly 200 volunteers were recruited to provide advice and information, including Samaritans.

As well as the 102,000 visitors, more than 700 school children took part in associated workshops to learn about and discuss issues related to violent crime. A further 30 free events were organised for the general public including workshops on bereavement and grief, and The Herefordshire Walking Festival included a visit to the Knife Angel along two of its routes.

More than 350 knives and two guns were surrendered to the two Knife Angel amnesty boxes  and these will now be melted down to produce a commemorative sculpture for the city and donations to the free event meant the Knife Angel team has gathered a legacy fund of more than £30,000 to continue with its work to raise awareness of the impact of violent crime.

One of the team behind its visit, Alison Davies, who lost her own son to knife crime in 2018, said:

“We are thrilled by Hereford’s response to the Knife Angel and would like to thank everyone who supported us, volunteered, or visited the statue.

“Many visitors were visibly moved and deeply affected by this stunning work. It certainly helped to stimulate debate and discussion around the subject of violent crime of all sorts and how we can prevent it. That can only be a good thing, and we are now planning how we can continue the debate into the future.”

The Knife Angel sculpture has been seen outside Liverpool, Coventry, Rochester, Derby, and Chester Cathedrals attracting hundreds of thousands of visitors. It can be seen outside Blackburn Cathedral this November.

Liverpool Cathedral has reported its Peace Doves art installation attracted 60,000 visitors in its first month and brought over £1million to the local economy.

The artwork, created by sculptor and artist Peter Walker, featured over 18,000 paper doves suspended from the roof of the Cathedral and was accompanied by a soundscape from composer David Harper, and was  opened up in May until the end of August.

“When we re-opened to visitors in May, we wanted to come back with something which our worshippers and visitors could enjoy and experience as a small gift to the city after the terrible fifteen months the world had just been through.

“It was great to see that the Peace Doves struck a chord with so many in the first few weeks,’ she added.

In Lichfield, volunteers welcomed 6855 visitors to The Great Exhibition by artistic collaboration, Luxmuralis. This year the light and sound art installation transformed the interior of the 900 year old cathedral with stories and images of science and the people behind them.

Lichfield’s Children’s Summer Activities were also based around the theme of science and 477 children and their families enjoyed experimenting with squidgy circuits, building arches and exploring things up close with microscopes.

And Lichfield’s Guides and Welcomers welcomed over 17,000 visitors into the Cathedral and took 253 people on tour over the last month. 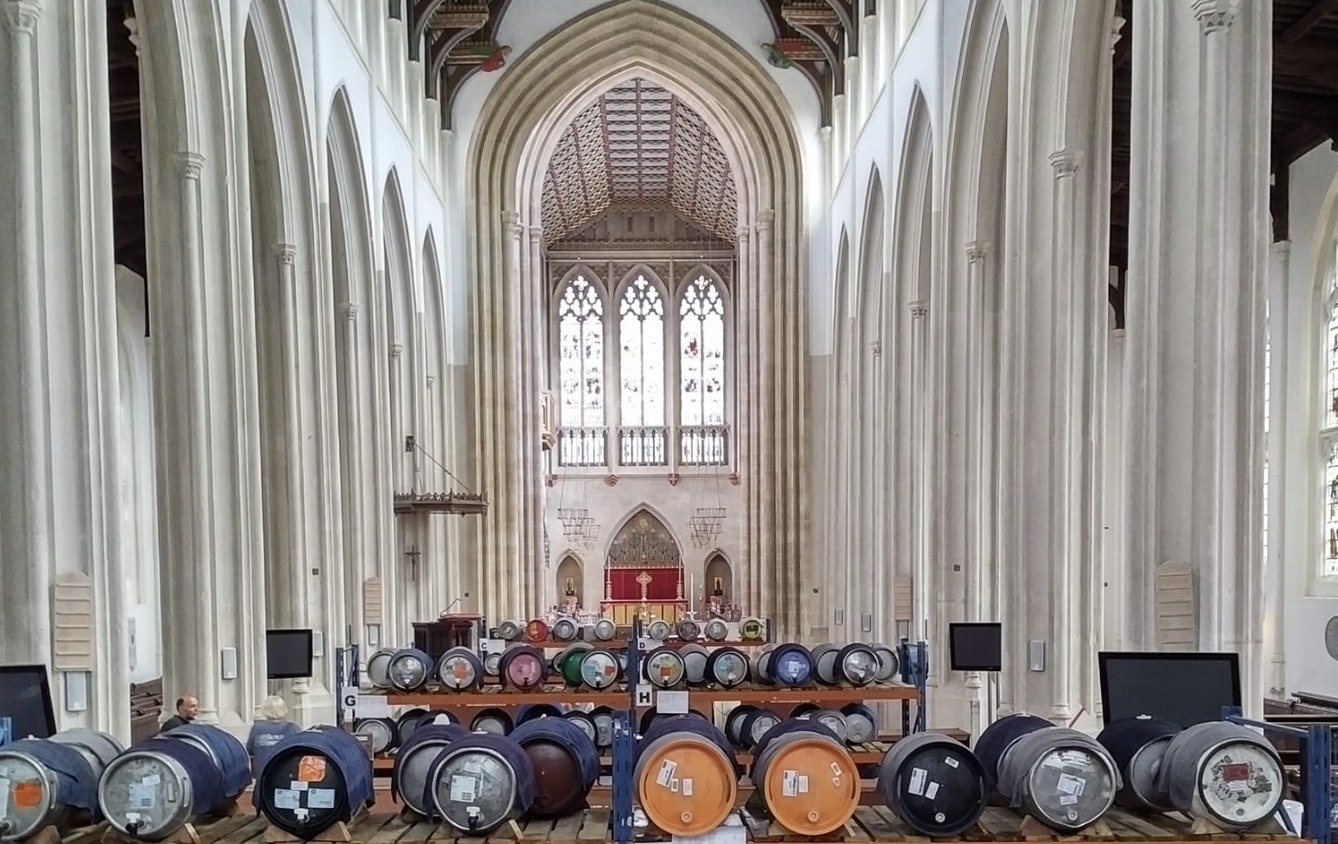 St Albans programme of events – which included two Cathedral at Night events, and a photographic exhibition featuring the faces and the people who make the city the place it is  – attracted on average 10,000 visitor a week and they are just gearing up for their Autumn programme which will feature a new light and sound show, fireworks and an evening with their very own poet in residence.

Visitor numbers at Salisbury Cathedral have been steadily climbing since the changes to Covid restrictions were introduced in July.  Over 14,500 people visited the Cathedral in that month and a steady stream have been booking for the late summer.

Ely Cathedral is seeing visitor numbers back on track with its 2019 figures with two art installations, Luke Jerram’s representation of our planet Earth, Gaia, and Solace, a glass sculpture of angel wings by Layne Rowe.

Plus they had 5,000 visitors to their inaugural Green Fair held on Saturday 31 July

Each activity earned  the participant a sticker while nine completed challenges resulted in a gold medal!

“It’s been wonderful to see so many families having a fantastic time here. The sounds of fun and laughter have filled the Cathedral and after the difficulties of the past year this is exactly what we want to see. The Cathedral has come alive again!”

More than 100,000 people have visited the Natural History Museum’s Dippy the dinosaur who took up residence in Norwich Cathedral’s Nave in July.

Dippy on Tour: A Natural History Adventure opened at the Cathedral on Tuesday 13 July 2021 and in the first six weeks 106,681 people had been to see the iconic 26m Diplodocus cast  -with Saturday 7 August seeing the highest volume of visitors with 4,354.

A further 1,884 young people have visited Dippy with their school or scouting organisation.

More than 51,000 of the visitors have also taken time to explore the Cathedral in greater detail and more than 2,250 people have enjoyed the wider Dippy events programme, with the most popular events to date being a sold-out film screening of Paddington (in which Dippy makes a cameo appearance) and a sold-out talk called Who was Dippy? by biologist, author and broadcaster Ben Garrod.

The Dean of Norwich, the Very Revd Jane Hedges, said:

“We are delighted to have welcomed more than 100,000 people to the Cathedral in the first six weeks of the Dippy on Tour exhibition.

“After such a challenging 18 months for everyone, it is brilliant that Dippy’s visit has helped to inspire such an exciting summer of prehistoric fun!

“Alongside the fun, our hope has always been that Dippy’s visit would also encourage important conversations about the environment, faith and science, and the future of our planet.

“The response to our Reflection Zone has been particularly heartening, with more than 6,000 people adding leaves to the zone’s trees and making their own personal pledges to help the environment, while our Talkative Tuesdays programme has led to many insightful talks and discussions taking place under the tail of Dippy.

Dippy on Tour is in Norwich Cathedral until October 30.