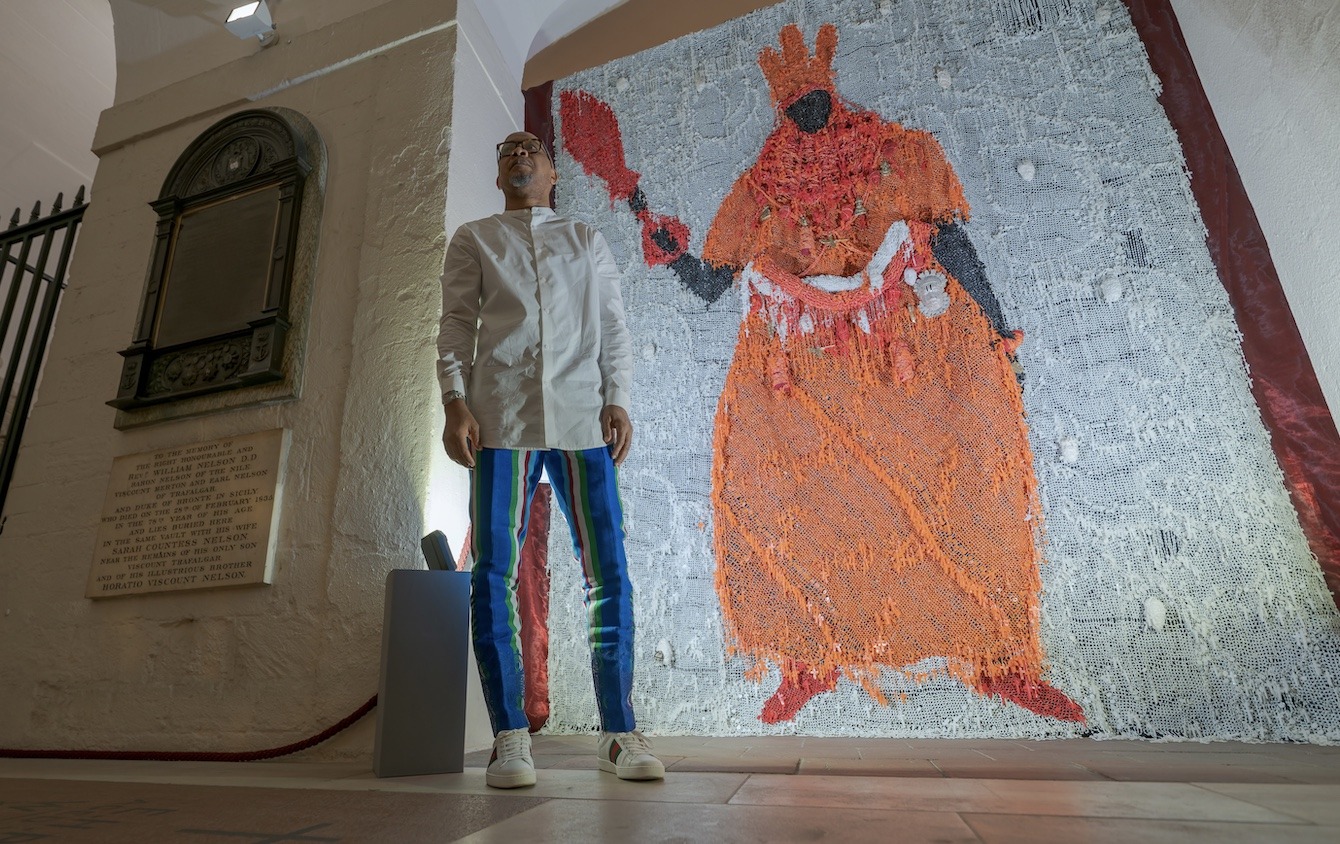 St. Paul’s Cathedral, London, has today unveiled the bold new artwork Still Standing by Nigerian-born artist, Victor Ehikhamenor, on display in the crypt from 17 February to 14 May 2022.

The specially-commissioned mixed-media work forms part of 50 Monuments in 50 Voices, a partnership between St Paul’s Cathedral and the Department of History of Art at the University of York to invite contemporary artists, poets, musicians, theologians, performers and academics to showcase their individual responses to 50 historic monuments across the Cathedral.

Based in Lagos, Nigeria, and Maryland, USA, Ehikhamenor is renowned for his broad practice comprising painting, sculpture, photography, and unique works on paper.

His richly-patterned works use symbolism from both traditional Edo religion and Catholicism, reflecting on the confluence of African and Western cultures. Still Standing combines rosary beads and Benin bronze hip ornament masks to depict an Oba (King) of Benin. 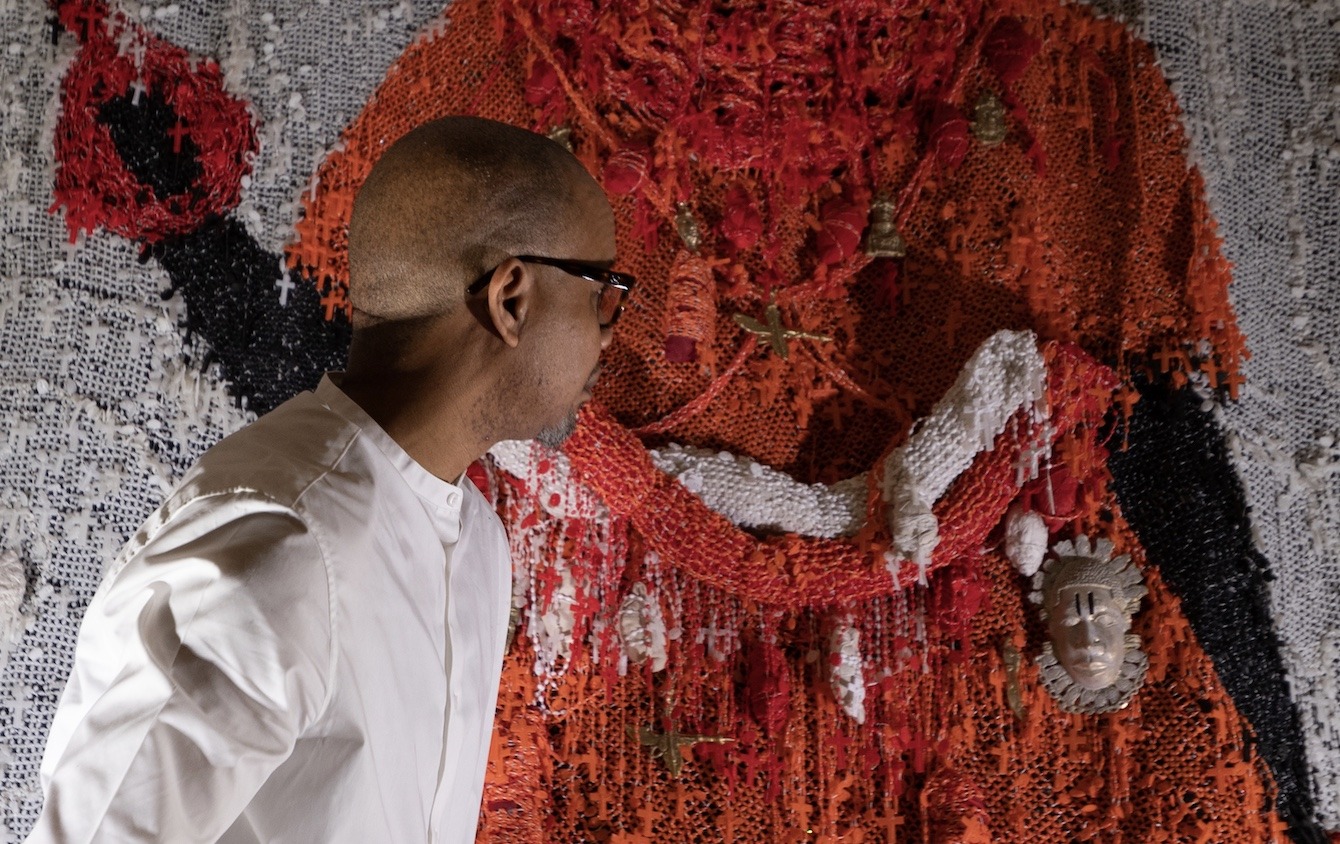 Still Standing has been commissioned and curated by Dan Hicks, Professor of Contemporary Archaeology at University of Oxford and Curator at the Pitt Rivers Museum and Simon Carter, Head of Collections at St Paul’s Cathedral. The installation responds to a brass memorial panel to Admiral Sir Harry Holdsworth Rawson (1843-1910) installed in the Nelson Chamber of the Cathedral’s Crypt in 1913. As the panel notes, Rawson had a long career in the Royal Navy, which culminated in his commanding the Benin Expedition of 1897, 125 years ago.

St Paul’s is a national landmark and the cathedral church for the Diocese of London. It houses over 200 monuments to significant figures throughout the ages, many made by the finest sculptors of the day and installed by the public. Among the people represented on memorials around the cathedral are giants of the arts, sciences, politics and military, from Admiral Nelson to Florence Nightingale. The memorials and sculptures were made by some of the finest artists of the day from John Flaxman to Augustus Rodin.

50 Monuments in 50 Voices launched on 1 December 2021 to present a weekly series of audio, visual and musical works responding to the Cathedral’s monuments from 1796 to 1916. Encompassing the Napoleonic wars up to the First World War, the series features memorials of eminent Victorian philanthropist Maria Hackett, the Duke of Wellington, and polar explorer Captain Robert Falcon Scott, amongst others. Forthcoming voices include comedian Frank Skinner, and musician and presenter Cerys Matthews, alongside a range of participants from different creative, intellectual, social, cultural, political, and theological backgrounds.

“When they visit St Paul’s, many people are struck by the vast number of monuments and memorials to past figures. The 50 Monuments in 50 Voices project invites responses to these memorials and the people they commemorate, from an array of different perspectives. As part of that project, the installation of Victor Ehikhamenor’s artwork contributes to the ongoing task of understanding the complexities of these monuments in 21st-century Britain.”

“History never sleeps nor slumbers. For me to be responding to the memorial brass of Admiral Sir Harry Holdsworth Rawson who led British troops in the sacking of the Benin Kingdom 125 years ago is a testament to this. The installation Still Standing was inspired by the resolute Oba Ovonramwen who was the reigning king of Benin Kingdom at the time of the expedition, but the artwork also memorializes the citizens and unknown gallant Benin soldiers who lost their lives in 1897 as well as the vibrant continuity of the kingdom till this day. I hope that we, the descendants of innumerable uncomfortable thorny pasts, will begin to have meaningful and balanced conversations through projects such as 50 Monuments in 50 Voices.”

“Installed on the 125th anniversary of the attack on Benin City, this specially-commissioned work opens up a unique space for remembrance and reflection. Still Standing reminds us of the ongoing nature of the rich artistic traditions of Benin, of the enduring legacies and losses of colonial war, and of the ability of art to help us reconcile the past and the present.”

Professor Jason Edwards from the University of York and project lead on the Pantheons project says,

“As well as detailing Rawson’s involvement in some of the most controversial military campaigns of the Nineteenth Century, including the Second Opium War in China and the destruction of Benin City in Benin in 1897, his bronze, brass, enamel, and marble memorial, by the little-known Army and Navy Company, is a significant artwork in its own right. Examined closely, its complex iconography includes English oak leaves and acorns, raven heads, Arabic script, a fort with a moat, Corinthian pilasters, dolphins, the Royal Humane Society silver medal, a jaunty naval officer, and a kangaroo, indicating Rawson’s last post as Governor of New South Wales. But, as the Pantheons project and Cathedral recognise, the monument only partially tells a difficult story, which must, today, be supplemented with other voices, other key perspectives”.

Specially commissioned for this installation at St Paul’s, with generous support from Art Fund Still Standing has been acquired by the University of Oxford’s Pitt Rivers Museum, which holds one of the most significant collections of Benin royal artworks.