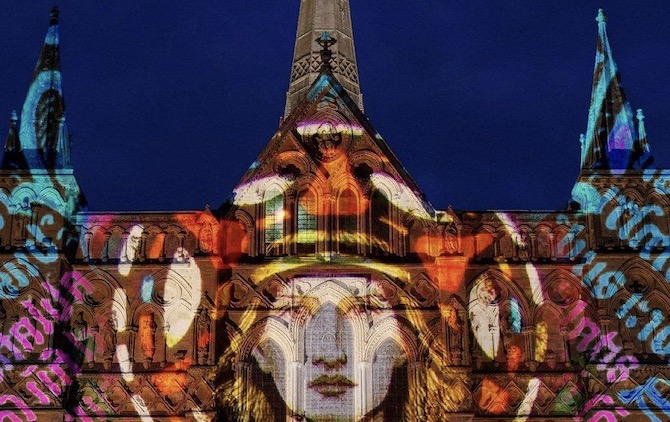 Salisbury 2020: City on the move is a year-long celebration of the Salisbury Cathedral’s move from Old Sarum 800 years ago and laying of the Cathedral’s first foundation stones on 28 April 1220.

Salisbury is unique among English cathedrals in having deliberately moved from one location to another, and this move was the catalyst for the city to develop. This celebratory year embraces both

Cathedral and city, and will feature a programme of concerts, art and community activities and worship across the city.

Sarum Lights
The skies above Salisbury were alive with light as Salisbury 2020: City on the move, launched its 800th year celebration programme with a light beam shone over two miles up into the heavens from Old Sarum, the Cathedral’s first home.

Shortly afterwards the first event of the year got underway as Sarum Lights, a light and sound spectacular running from Tuesday 18 to Saturday 22 February, kicked off the celebrations in style by wowing over 2,000 visitors at the city’s Cathedral. Around 10,000 people are expected to visit the spectacular, created by Luxmuralis artistic director, Peter Walker and composer David Harper transformed the towering West Front with projections exploring the story of the Cathedral since its foundation in 1220. Visitors also have the opportunity to travel back through time inside the Cathedral with light installations and specially commissioned music, creating a walking journey through the Cathedral spaces, re-imagining the life and work of the people of Salisbury, who shaped the city as it stands today.

The vertical light beam at Old Sarum (produced by Audacious) should be seen for nearly 2.5 miles – the distance the Cathedral moved when its first foundation stones were laid on 28 April 1220 and the development of the city of today began. Audacious has created the illumination to remind people of Salisbury Cathedral’s original home and the distance people travelled to rebuild it.The beam is intended to be observed from a distance and to spark conversations around the year and highlight the change in 800 years from the once bustling Old Sarum to its quiet location on the outskirts of the now thriving Salisbury.

The people of Salisbury worked together to move and build the new Cathedral and, this year, they come together again with the goal to move their city forward, cement its resilience and highlight the best of Salisbury to the world. The year-long celebration sees the city showcasing a programme packed with shows, events, activities, sports, music and talks promising to feed the soul, inform, educate, excite and above all, entertain people from far and wide.

The city is offering twelve months of dynamic events and activities inspired by the theme of movement all falling into one of three areas: physical movement, technological movement and movement in ideas and thought.

The Very Reverend Nicholas Papadopulos, the Dean of Salisbury said:

“After three years of planning, it is a thrill that Salisbury 2020 is finally on the move and it is fitting that Sarum Lights, which testifies to the faith and endeavour of the Cathedral’s builders, is the first event of the year. Light is a potent symbol in the church and the illuminations provide a suitably dramatic start to what will be a landmark year for the city, its residents and visitors. It is brilliant to see so many people supporting this celebration, and engaging with a wide ranging programme that tells the unique story of how Salisbury came to be here.”

“The Cathedral’s move from Old Sarum was politically, logistically and commercially bold, made in defiance of the Kings’ men, with an ambitious building plan that would challenge even modern, technologically-advanced builders. In just 38 years the Cathedral building was constructed ‘floating’ on a bed of sand, gravel and water, and just over fifty years later the building boasted a soaring Spire, 123m high, visible for miles around, and to this day the tallest medieval Spire still standing in this country.”

Highlights of events for Salisbury 2020: City on the move include:

18-22 February – Sarum Lights
A family friendly, fully immersive light and sound spectacular that explores the rich history of Salisbury Cathedral and the people who have cared for it over the past 800 years. This awe-inspiring show combines soundscapes and stunning light projections themed around different aspects of the Cathedral’s story located in different zones, starting at the West Front and continuing throughout the inside of the Cathedral.

3, 10, 17 March – Salisbury Conversations
On three consecutive Tuesdays in lent, an impressive line-up academics, public figures, theologians and social observers will gather at Salisbury Cathedral to take part in Salisbury Conversations, a series of discussions tackling major issues facing us this century from the role of feminism in our society to the ethics of algorithms and climate change.

1 April to 31 May – Wessex Archeology and Salisbury Indies Artefact Trail
Exploring the archeology and trades of the city 36 independent shops will display archeological artefacts that will create a trail around the city. Maps available from participating shops and Salisbury Tourist Information Centre.

From 26 April – 2020 Organ Festival
Salisbury Cathedral’s famous Father Willis organ will be re-dedicated at Evensong on Sunday 26 April, following a year of restoration and repair. The 2020 Organ Festival launches with a performance of Mahler’s Symphony No 2 transcribed and performed by organist David Briggs and the full Cathedral choir (adults, girls and boys) and joined by other local choirs. The Organ Prom returns in the summer and on Saturday 13 June there will be a family concert featuring Prokofiev’s Peter and the Wolf.

22 May – 6 June – Salisbury International Arts Festival
Exploding out of the Playhouse and Arts Centre, into the streets and spaces of the city, this two-week Festival of Celebration will celebrate the beauty, courage and joy of human movement.

14 June – Cathedral Stakes Race Day
A fun-filled day with exciting racing and lots of great free entertainment for the children to enjoy. The EBF Cathedral Stakes is the first valuable ‘Listed’ race of the year. It is a race run over the sprint distance of 6 furlongs.

16 October – 18 October – Salisbury Literary Festival
Celebrating the rich heritage of Salisbury’s literary past, the festival champions the very best of writing today, and will inspire the next generation of writers to follow.

For more information on Salisbury 2020: City on the move visit salisbury2020.com