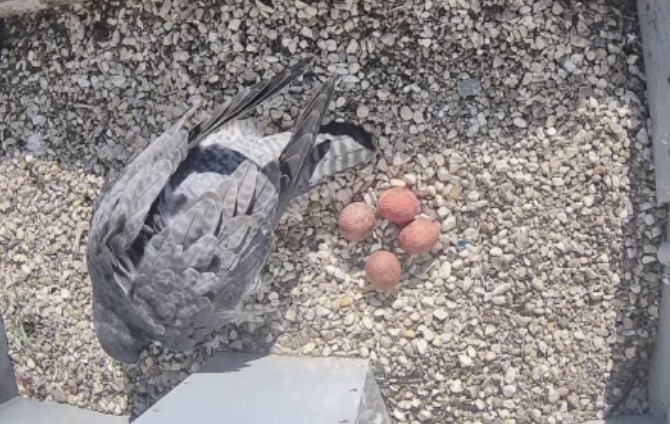 Undeterred by the global pandemic, we’re pleased to announce our cathedral peregrines are getting on with life.

Winchester, Salisbury, Chichester, Norwich and Wakefield have all reported a great start to the peregrine nesting season.

Winchester saw its first egg laid on March 17, Salisbury gave us an appropriate gift with the announcement of a single egg laid on Mothering Sunday, and Wakefield’s peregrines followed a day later with the first egg laid just before midnight on the night of 23rd/24th March.

There are records of peregrines nesting in Salisbury between 1864 and 1953 and then again in 2014 when a mated pair nested, produced and fledged four chicks in a nest box built by the Works Yard team.

The Salisbury peregrines have their own You Tube channel so you can watch them during the season.

Peregrine falcons have nested on Wakefield Cathedral since 2015.

During the past five years, the peregrines have hatched and raised seventeen young, as well as caring for one adopted youngster. You can find out more about this project here

And watch them live here:

A pair of peregrines nested twice on the Police Headquarters in Winchester in 2011 and 2012, but as they suffered from exposure to bad weather, the Hampshire Ornithological Society (HOS) installed a nesting box on the roof in 2013.

This pair then nested each year until early 2017 when the building was demolished.

Knowing that the birds liked sitting on Cathedral it was suspected that they might try to nest there, and indeed they did – in a gulley in 2017.

Sadly, heavy rain flooded their nest. In 2018 HOS asked for permission to install a raised nesting tray in the same gulley and within weeks of this being installed the birds laid eggs in March.

Three beautiful chicks were reared and stayed around the Cathedral for much of the summer and as peregrines are very loyal to their nest sites, the Cathedral staff had cleaned the tray in the hope that nesting would take place once again – and they’ve been rewarded.

You can keep up with them here

Chichester Cathedral’s famed peregrine falcons have returned for the forthcoming breeding season and have been sighted regularly from the Cathedral grounds.

The male, affectionately named Maverick, is back defending his territory with the same female. Peregrines were first sighted at the cathedral in the late 1990s and this latest pair previously raised four chicks.

Over the years, the peregrines have been sighted from the Cathedral grounds from March until July with Open Days organised throughout the season so visitors can watch them up close. This year the Open Day May dates have been cancelled and please keep an eye on the website for June and July

The peregrine project is run jointly by the Cathedral, the Sussex Ornithological Society (SOS) and local wildlife enthusiasts David and Janet Shaw who have been observing the birds since 2001. The peregrines have some new neighbours this year as a pair of ravens have set up house on the ‘crown’ of the small spire behind the peregrines’ nesting site. Both peregrines have been seen launching attacks but this has not deterred the ravens who seem to be keeping to the air space on the east side of the Cathedral.

The peregrines at Norwich Cathedral are looked after and watched by the Hawk and Owl Trust. The live webcam can be found here where you’ll see they already have four eggs.

More peregrine links and webcam footage can be found here.