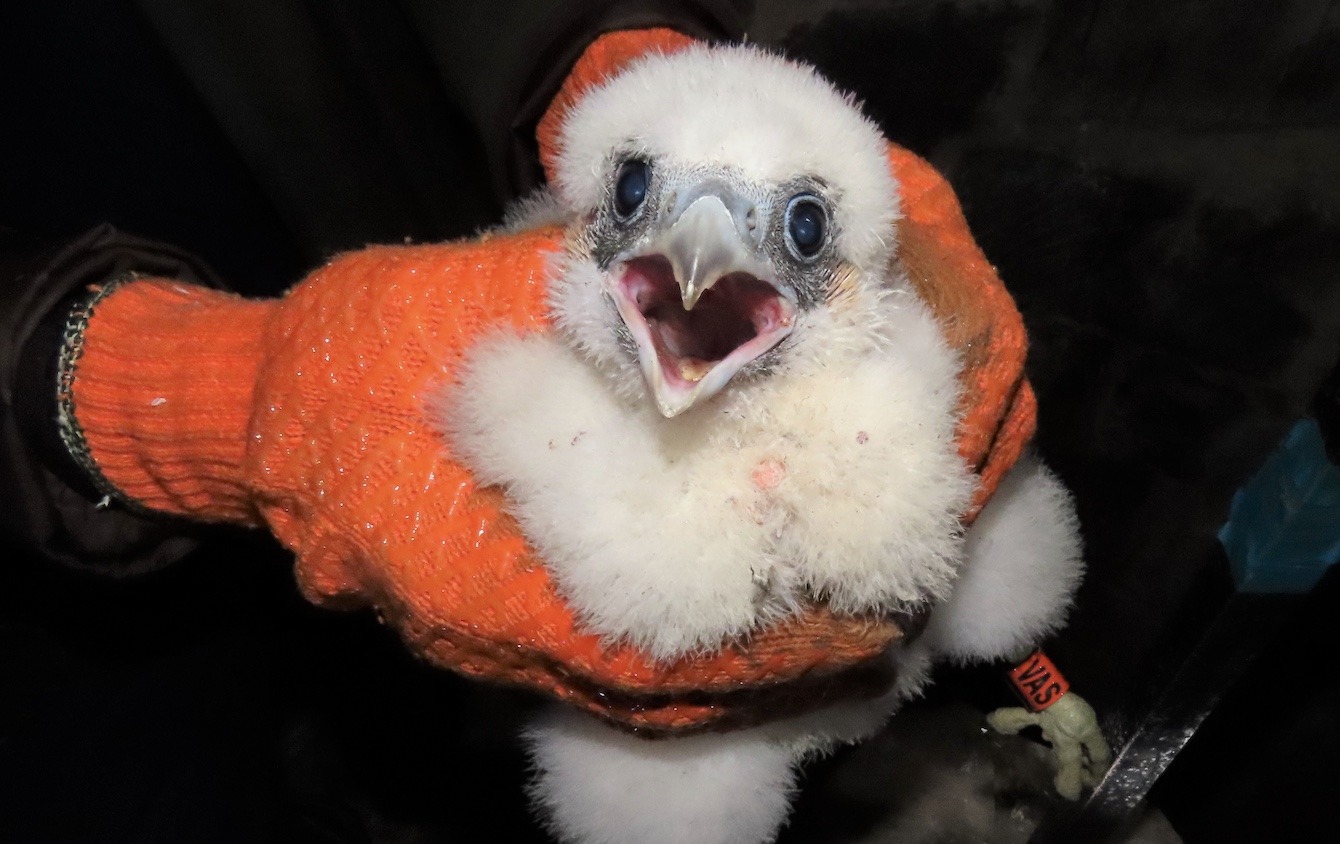 It’s that time again … our Cathedral peregrine chicks have been ringed at Winchester and Salisbury this month, while Chichester saw three out of its four eggs hatch.

Four chicks have been ringed on Salisbury Cathedral Tower and voting will be opened shortly to name the new birds.

This year, the Salisbury Peregrine Team want to honour the Sarum South vaccine team who worked in the Cathedral on the rollout of the vaccine programme, so are looking for names from the field of medicine and public health – and if possible have a connection, however distant, to Salisbury and the Cathedral.

The four chicks each sport a distinctive orange ring, the colour used for peregrines ringed in the South region – and every ring bears a unique three-letter code that allows researchers and livestream viewers to keep track of each individual chick from now on. This year’s letters are  TVD, PTJ, TND (the enormous female) and PHJ.

The chicks will remain on the Cathedral Tower balcony until June, when they are expected to fledge. They will stay around the Cathedral for at least month after that, learning survival and hunting skills from their parents before striking out on their own. 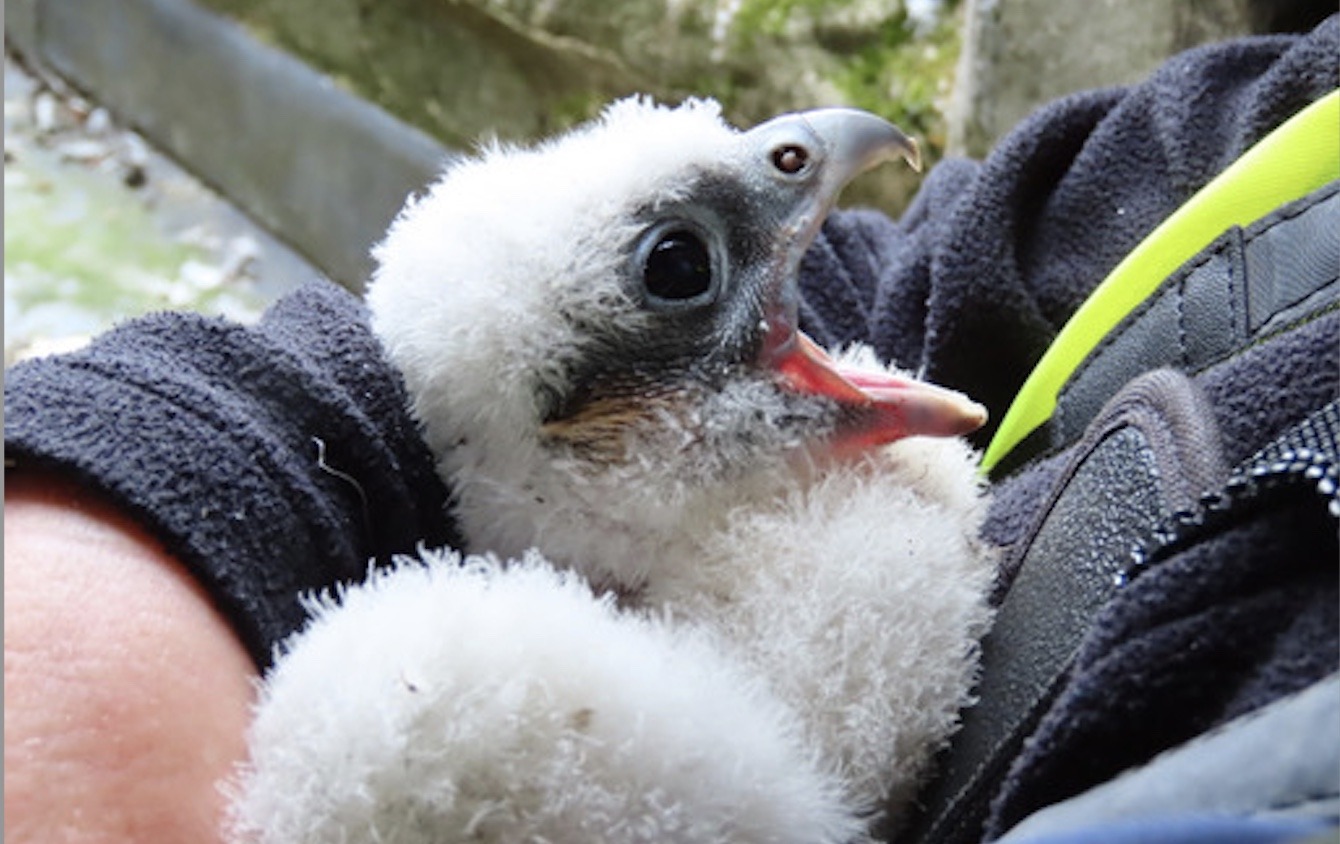 “We have ringed them slightly earlier than last year, but they are all of a good size and you can see their adult feathers starting to show. They will grow very fast from now on and it won’t be long before we see them hopping off the nest to explore the balcony.”

Philip Sheldrake established the peregrine project at the Cathedral eight years ago, wooing the birds back after a 60-year absence. Along with Gary Price, Clerk of Works and Granville Pictor, the Cathedral’s peregrine specialist, he has overseen the development of the programme. Today the Cathedral has three camera feeds on the balcony and watching the live stream has proved very popular during the various lockdowns, with thousands of people viewing remotely both in the UK and abroad.

Details of the live cathedral peregrine webcams can be found here.

Since going live in March this year the webcam page has recorded nearly 188,000 unique page views – and Monday 3rd May the page was access 9,000 times, the highest daily viewing number to-date. Videos posted on Facebook have clocked up over 2 million views in the past two months. Records show that across 2020-2021 viewers from 88 different countries have watched the birds.

Winchester Cathedral too has just announced its three Peregrine chicks, two females and one male, have been ringed by the Hampshire Ornithological Society.

The three chicks hatched last month and as previous years, placing special identification rings on the legs of the chicks will allow their future lives and journeys to be tracked so that information can be collected on their movements and behaviours.

“This is our one chance to check that the chicks are doing well, and to give them individual leg rings which enables us to receive information about their future travels. This is how we know that one of the 2019 chicks is alive and well in Romsey, while those from other nests have travelled to neighbouring counties and as far as Holland! Everything is done under a government licence and the birds are not hurt in any way. Winnie and Chester are great parents so they will go back to their chicks once the brief visit is over.”

Now that the chicks have been ringed, they will spend another month or more around the Cathedral learning how to be independent before going their own way.

Live footage from the nesting site is currently being streamed to the Winchester Cathedral website.

Further information, pictures and diary updates on the progress of the chicks from hatchlings to fledglings is available here.

Meanwhile early May saw Chichester Cathedral welcome their chicks – three out of the four eggs have now hatched on the Cathedral spire. Everyone can follow the peregrines’ progress from a webcam installed in the nesting site. Stream now >>

It is twenty years since peregrines first nested below the Chichester’s spire and in that time they have raised nearly 50 young.

The project is funded jointly by Chichester Cathedral, David Shaw Wildlife and the Sussex Ornithological Society.