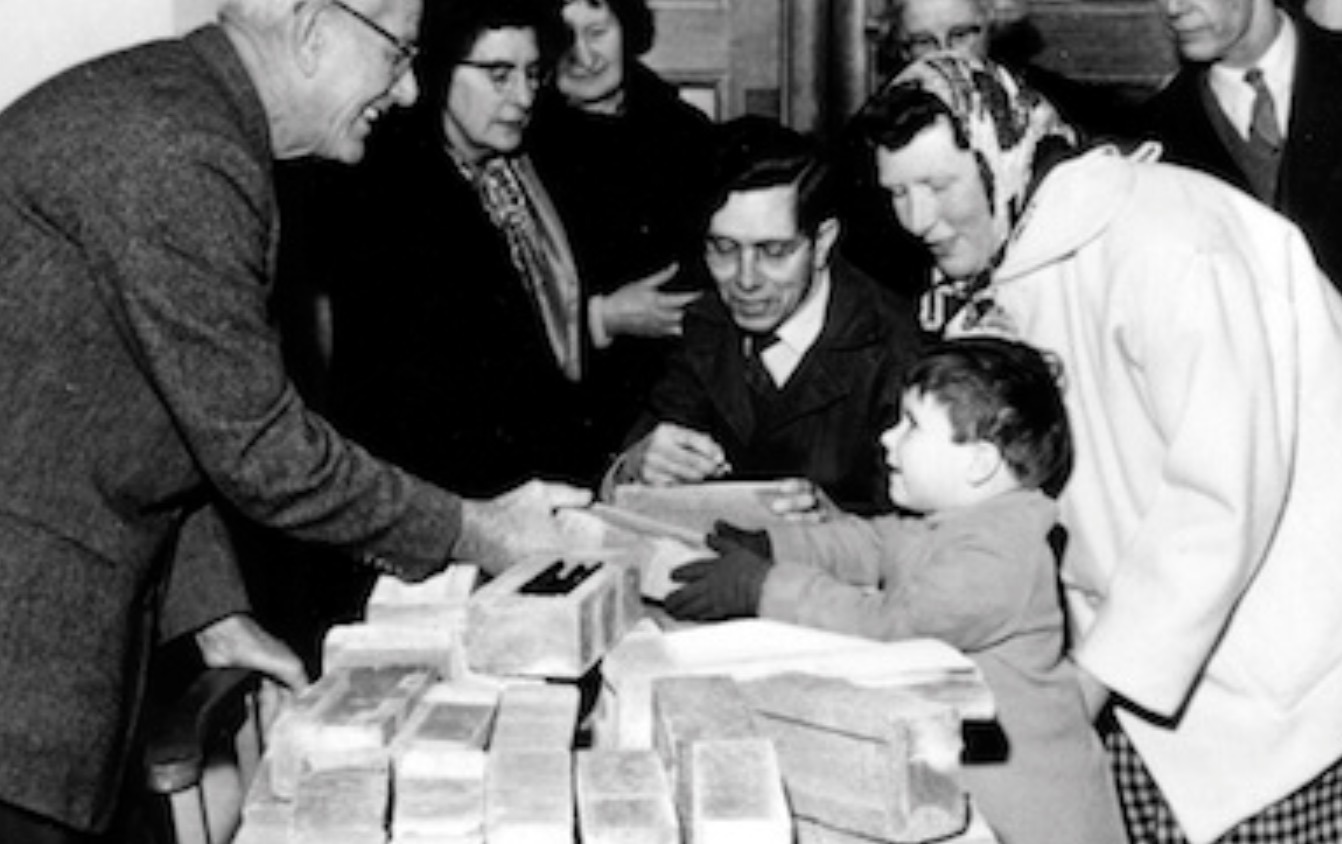 It’s goodbye to our 2020 #366Days Campaign and hello to our new campaign for 2021, #DidYouKnow. Our new campaign will bring you some known and little known facts about our wonderful cathedrals.

Christ Church Cathedral is forever associated with Alice in Wonderland, written by Charles Dodgson, Tutor in Mathematics, under the pen name Lewis Carroll. The story was inspired by a picnic party which included Alice and Edith Liddell, the daughters of the then Dean of Christ Church. Many of the characters in the stories are inspired by real people Christ Church figures. Alice is commemorated in stained glass in the Great Hall. 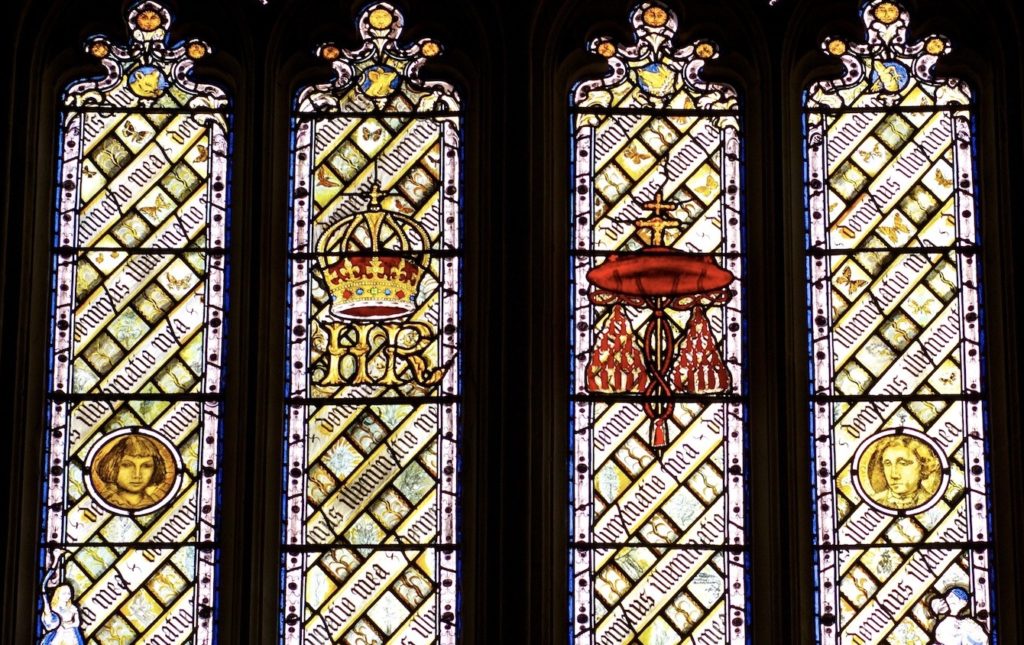 In the Russell Chantry at Lincoln Cathedral, you can find stunning murals painted by Bloomsbury Group artist Duncan Grant. The murals depict St Blaise, the patron saint of wool workers. Unveiled in 1959 they remained private for a number of years, possibly because Duncan Grant chose to put a little too much of his own life onto the walls, but were reopened for public view after restoration in 1990. 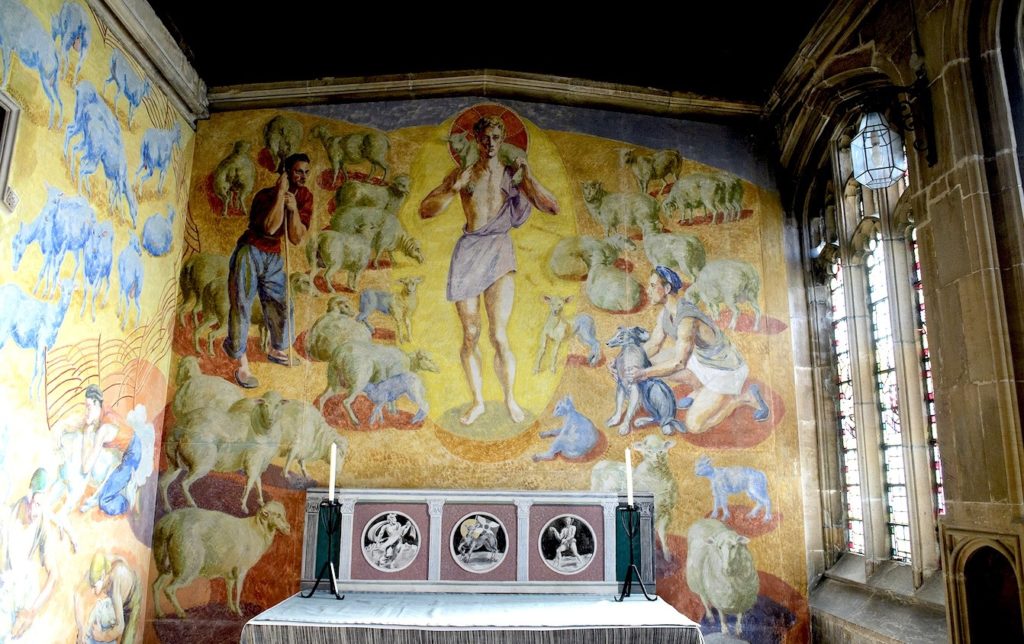 The Chapter House at Southwell Minster is the ONLY one in the country with a stone-vaulted roof that is unsupported by a central column.

How did they do that??

It’s an incredible feat of engineering when it was finished c.1300 with it’s extraordinary carved stone leaves and “green men” it is widely considered one of the most beautiful buildings in England. Can’t argue with that. 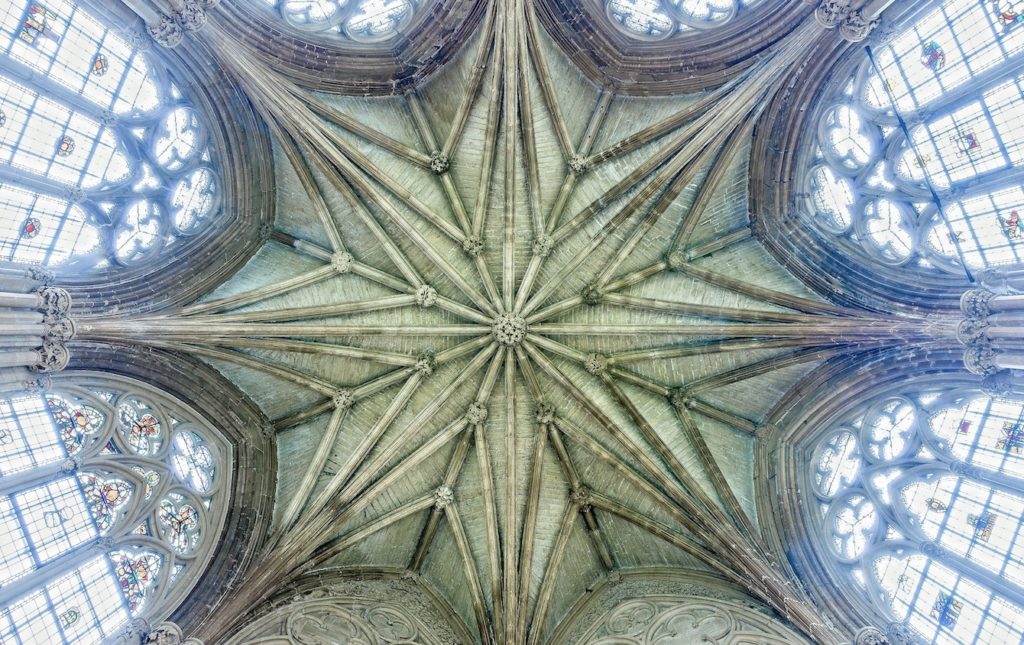 St Edmundsbury Cathedral has 1084 kneelers and each one is unique. 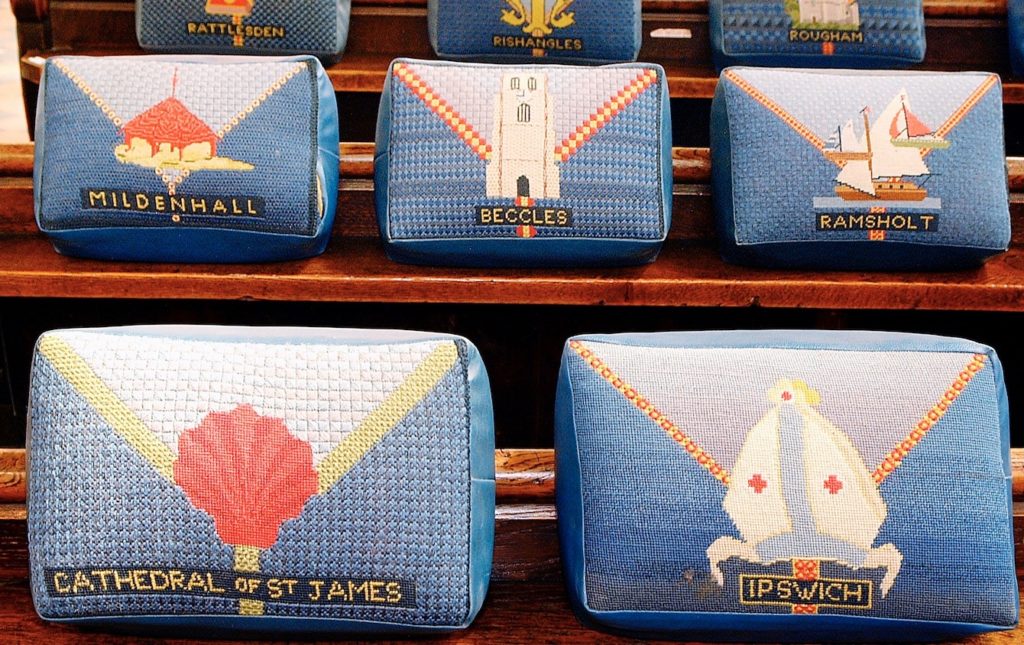 They represent each parish in the Diocese and each have an image representing that parish. The one for Darsham has a railway level crossing gate on it. 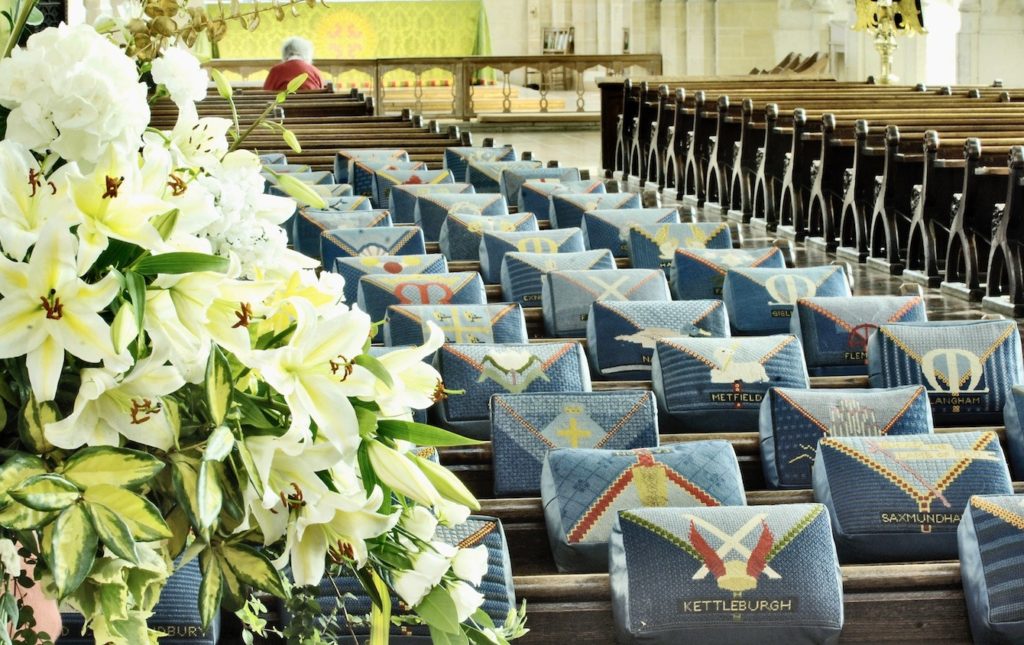 #CathedralsDYK – 200,000 people bought bricks to complete Guildford Cathedral in the aftermath of World War 2 – including our Queen – through the ‘Buy-a Brick’ fundraiser.

Did You Know comes on the back of the success of our #366Days campaign which saw us share a photo from one of our cathedrals every day of 2020 which meant you could enjoy a daily glimpse of their soaring spires, historic treasures and sacred spaces even when you could not visit them.

We hope #DYK will continue to pique your interest in all things cathedrals – and you can find all our #366 images here.

#DYK – 200,000 people bought bricks to complete Guildford Cathedral in the aftermath of World War 2 – including our Queen – through the ‘Buy-a Brick’ campaign. 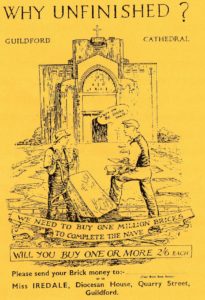 Guildford Cathedral is preparing to celebrate the 60th anniversary of its consecration later this year and this is just one of many stories it will share.

Work on building the new cathedral in Guildford stood still throughout World War Two and it wasn’t until war-time building restrictions were finally lifted that efforts to complete the Cathedral could start anew. This meant fundraising began again too – but this time they needed to raise four times the original build estimate of £250,000.

In 1952 Miss Eleanor Iredale, the then secretary of the Cathedral Committee, launched the ‘Buy-a Brick’ campaign and between 1952 and 1961 more than 200,000 ordinary people bought a brick for 2s 6d (12½p) and inscribed it with their name. The bricks were made from clay taken from Stag Hill on which Guildford Cathedral stands.

Subscribers came from all across the country including groups of school children who clubbed together to buy a brick. Bricks were bought in memory of loved ones, as a gift or for a celebration. And the most important brick buyer was HM The Queen – both she and Prince Philip bought a brick and their signatures can still be seen today.

There are approximately 1,000,000 bricks in the Nave and the same number in the tower. Completion of the building was made possible only through the campaign’s success and the generosity of the brick-givers.

Manchester Cathedral has bee hives on it’s roof. Set up by it’s own Canon Apiary in 2011. And guess what, you can buy the honey which they have called ‘Heavenly Honey’. 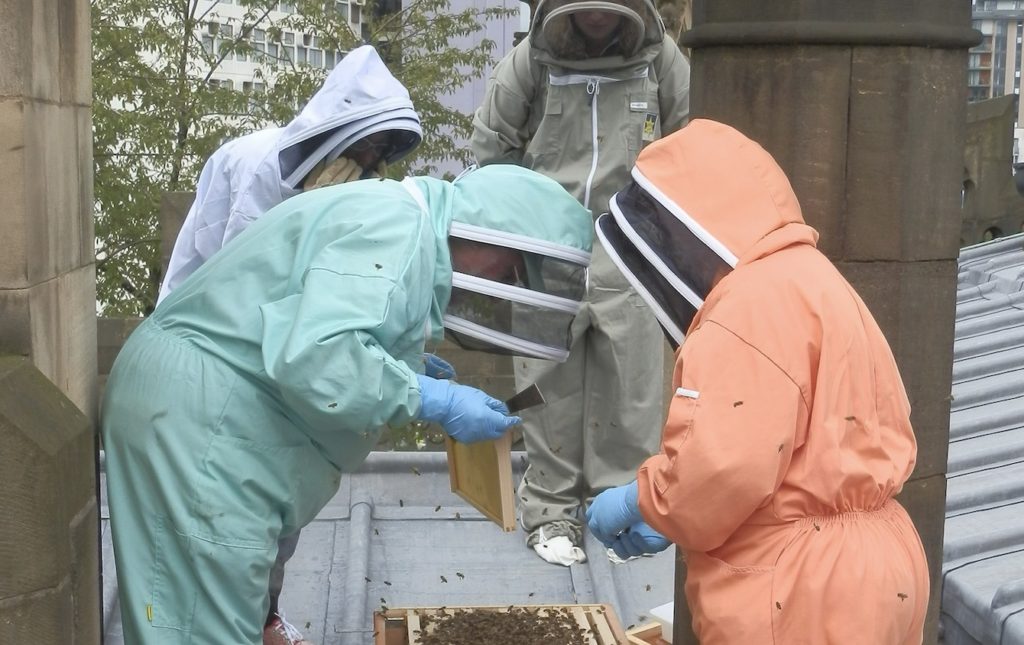 Keep an eye on our social media for these regular posts – and remember images from our #366Days can now be found here.