A vigil will be held tonight (Thursday) in Leicester Cathedral to remember those affected by the Easter Day bombings in Sri Lanka.

Led by the Bishop of Leicester, the Rt Revd Martyn Snow, it starts at 5.30pm. The Cathedral prayer station is also available for prayer and quiet reflection.

All through the week candles have been lit and prayers have been said in our cathedrals, as they remember and stand together with their communities against the violence and hate of the six suicide bombings which have now killed over 350 people and injured around 500 more.

As the news began to filter through on Easter Day many deans used the story of the resurrection to bring hope and some meaning to those darkest hours. 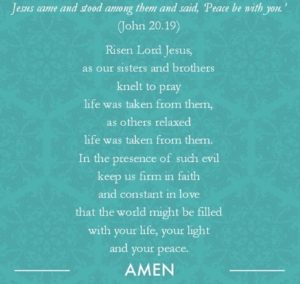 – Prayer by the Dean of Southwark, Andrew Nunn –

In Canterbury, Archbishop Justin Welby used his Easter Sermon to condemn the violence and stand in condolence and solidarity with the people of Sri Lanka. He shared a prayer on social media, which is now on display around the cathedral.

The Dean of Southwark, the Very Revd Andrew Nunn wrote a prayer for Sri Lanka which has ben used there all week, and shared widely round the rest of the cathedrals in England.

On Tuesday Bradford stood silent as people of all faiths gathered in the city’s Centenary Square in a poignant show of solidarity and unity at the public vigil led by the Dean of Bradford, the Very Revd Jerry Lepine.

Birmingham has set up a prayer station and written a new prayer you can find here.

On Friday there will be one minute silence in Blackburn when the interfaith community of Blackburn and Darwen come together to remember Sri Lanka.

“Atrocities such as these are an attack on us all. We mustn’t let hatred win.”

Peterborough Cathedral will hold an outdoor vigil to remember the victims on Friday evening (April 26).

The vigil will mirror the one held on Friday, March 22 following the terrorist attack in New Zealand.

“We welcome people of all faiths or none to come together and stand united against violence and terrorism in this short vigil.”

The Cathedral will also be holding Evening Prayer at 5.30pm before the vigil gets underway.

In Wakefield, there will be a public vigil on the steps of Wakefield Cathedral on Saturday at noon with people invited to gather there at 11.55am.

On Sunday – exactly one week on from the devastating terror attacks – Gloucester Cathedral will hold a short act of remembrance and observe a time of silence.

The Right Revd Rachel Treweek, Bishop of Gloucester and the Very Revd Stephen Lake, Dean of Gloucester, will be present at the gathering in Cathedral Green on Sunday 28 April at 10.00am.

‘We invite people of all faiths and none, to gather together, to remember those who were killed and injured when they were simply in prayer. “

It will be followed at 10.15am by the Cathedral Sunday Service

Manchester Cathedral is holding a vigil on Sunday at 7pm to pray and remember all those killed injured and those still waiting for news or sitting by the bedside of loved one.

There will be quiet time for reflection, a minute silence, prayer, lighting a candle, and words from representatives of different faith communities. There will be a book of condolence and refreshments afterwards.

To date, 359 people have lost their lives in the explosions and over 500 were wounded. Some 38 foreign nationals were among the dead, with another 14 unaccounted for. The death toll includes at least 8 British citizens and at least 11 Indian nationals.

The six near-simultaneous attacks on three churches and three luxury hotels in and around the capital Colombo and three related blasts later Sunday were the South Asian island nation’s deadliest violence in a decade.