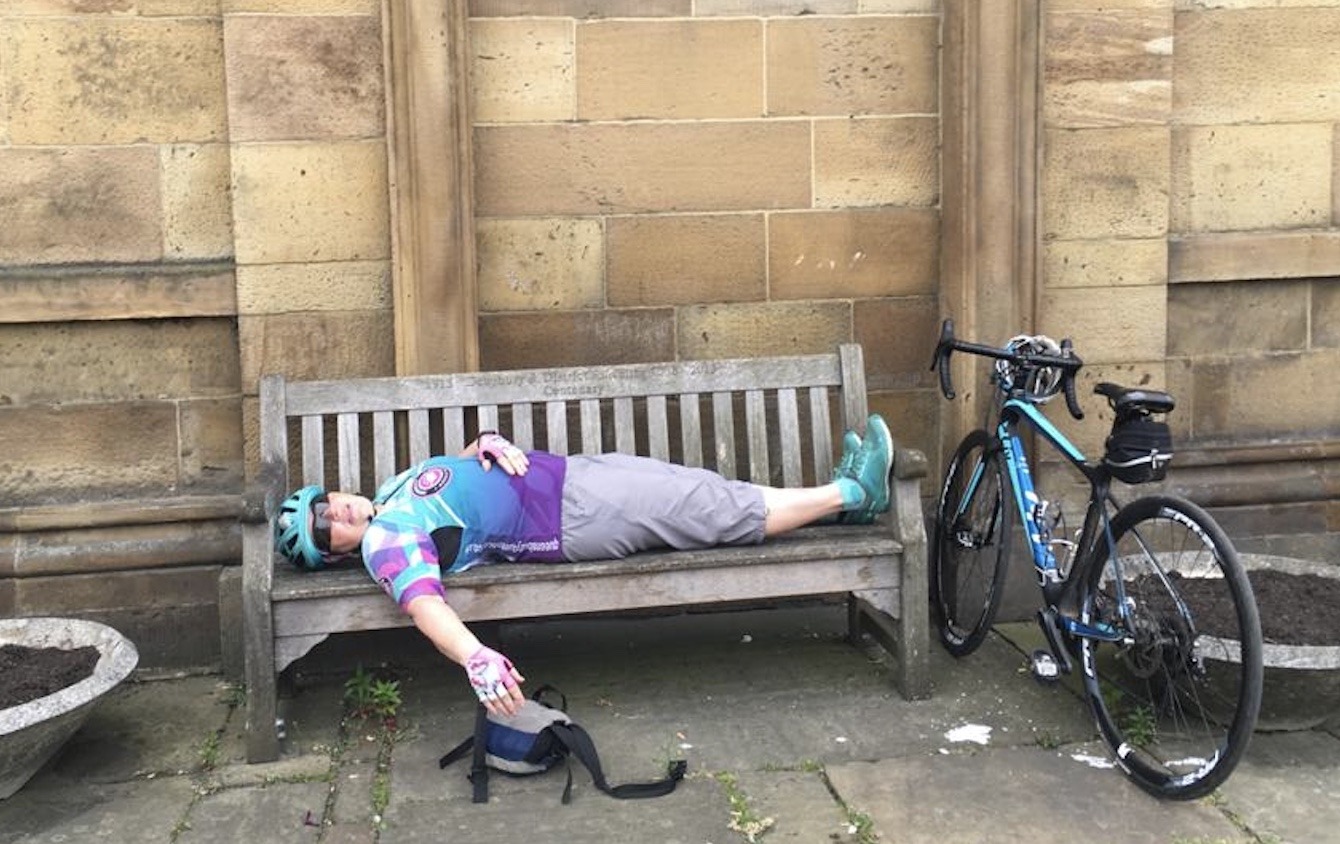 The sun shone for the first week of the national relay to launch the new Cathedrals Cycle Route – and no-one dropped the baton!

Hundreds of cyclists have volunteered to ride the different legs of the 2,000 mile round trip passing on a specially designed baton at each of our 42 Church of England cathedrals. 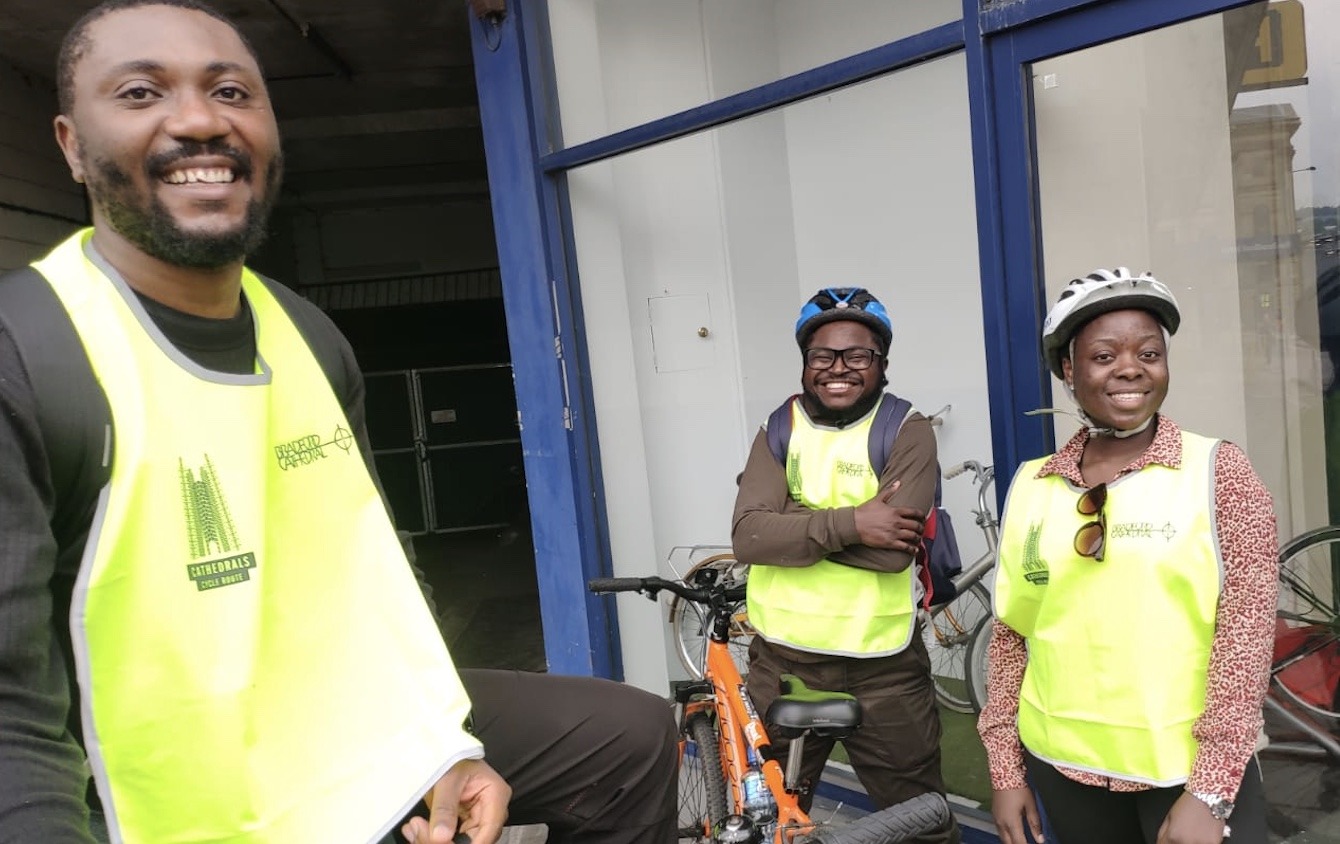 The numbers included cathedral staff, volunteers, members of the wider cathedral community and local cycling enthusiasts,– there was even a banana who joined the 15 plus team who cycled the 20 miles between Bradford and Wakefield cathedrals this week.

(Read Shaun Cutler’s notes on the first week of the Cathedrals Cycle Route at the bottom of this article).

There was much needed tea and cake at Lincoln Cathedral for the team who managed the 49 miles from Sheffield.  The Sheriff of Nottingham joined the team to ride the 34 mile leg between Southwell Minster to Derby which was also ridden by David Sneath who is raising funds for Southwell Minster Choir Association. You can donate here https://www.justgiving.com/fundraising/David-Sneath3 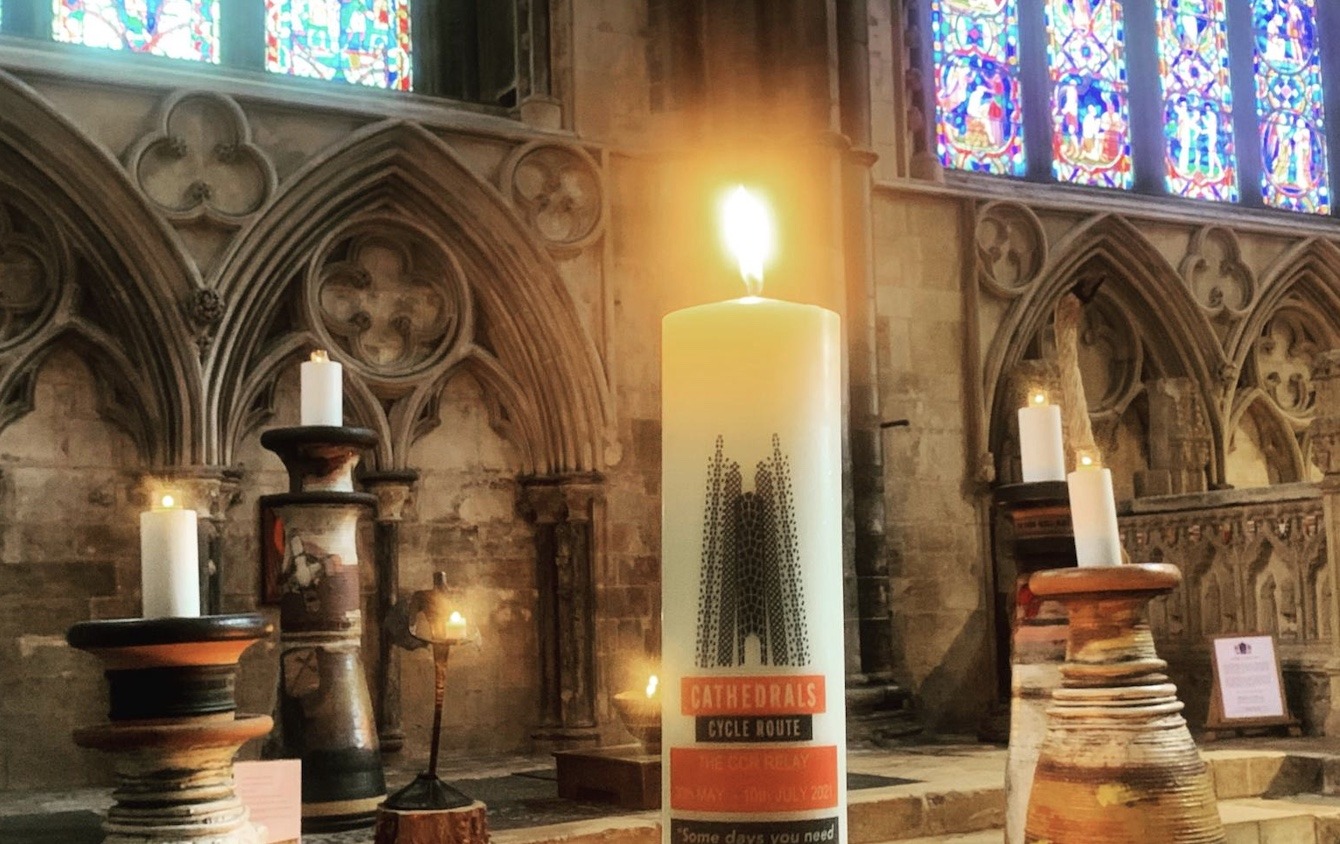 And a Methodist minister, the Revd John Kime from the Gloucestershire circuit, cycled the whole cathedrals route – on his own-  with no back up vehicle – in 26 days – on his mission to spread the Climate Emergency message to every other Methodist area in the country ahead of the G7 summit which opens this weekend in Cornwall and the COP 26 in Glasgow in November. He carried a letter and invited every one of us “to tread more lightly upon this earth”.

His story of visiting every 42 Church of England cathedrals since setting off from Truro on May 5th can be found on Facebook @GloucestershireMethodists.

A team of cyclists set off from Newcastle Cathedral on Sunday May 30 – at the start of Cycling UK’s Bike Week on a relay to ride 42 Cathedrals in 42 days to launch this, the latest pilgrimage route, the Cathedrals Cycle Route (CCR). 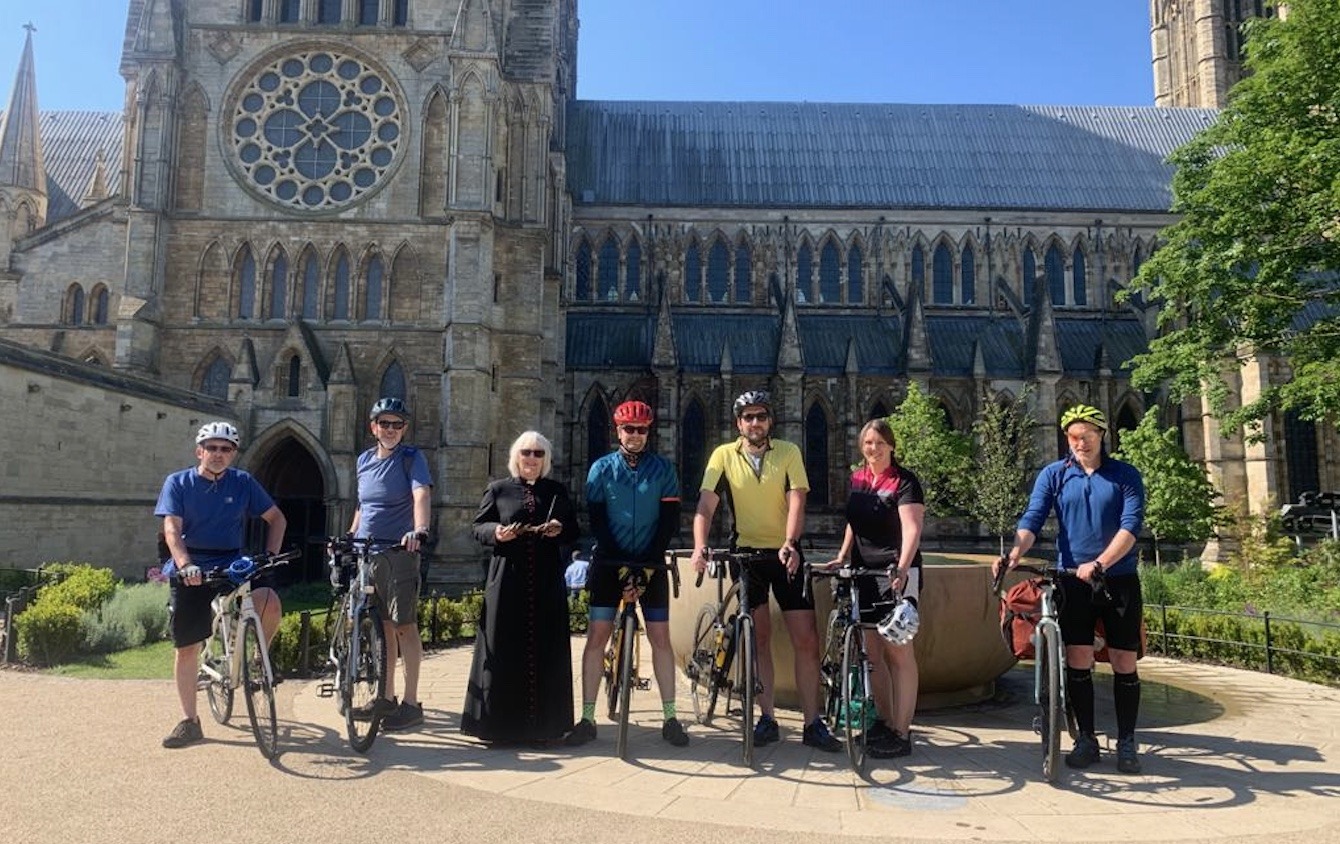 The CCR is a unique partnership between Sustrans, Cycling UK, the British Pilgrimage Trust and the Association of English Cathedrals that links all 42 Church of England cathedrals in a new initiative to promote greener travel and mental and physical wellbeing.

The 2,000 mile Cathedrals Cycle Route is the invention of academic, entrepreneur and keen cyclist Shaun Cutler, from Northumbria University, and is designed to help us all out of lockdown with opportunities for short cycle rides between cathedrals, new partnerships and fundraising for physical and mental well-being activities.

Shaun was in the first cohort of cyclists launching the route from Newcastle to Durham on the first leg of this mammoth journey and he said: “The Cathedrals Cycle Route is about connecting our historic cathedrals and enjoying the spaces between them.

“Now more than ever, after a year of living with the coronavirus pandemic, this is a way to support people’s mental and physical health and promote the mission of England’s cathedrals through pilgrimage, wellbeing and heritage.”

The first week saw cyclists ride from Newcastle to Durham, Durham to Ripon, Ripon to York, York to Bradford, Bradford to Wakefield, Wakefield to Sheffield, Sheffield to Lincoln, Lincoln to Southwell and Southwell to Derby. Total miles 299. 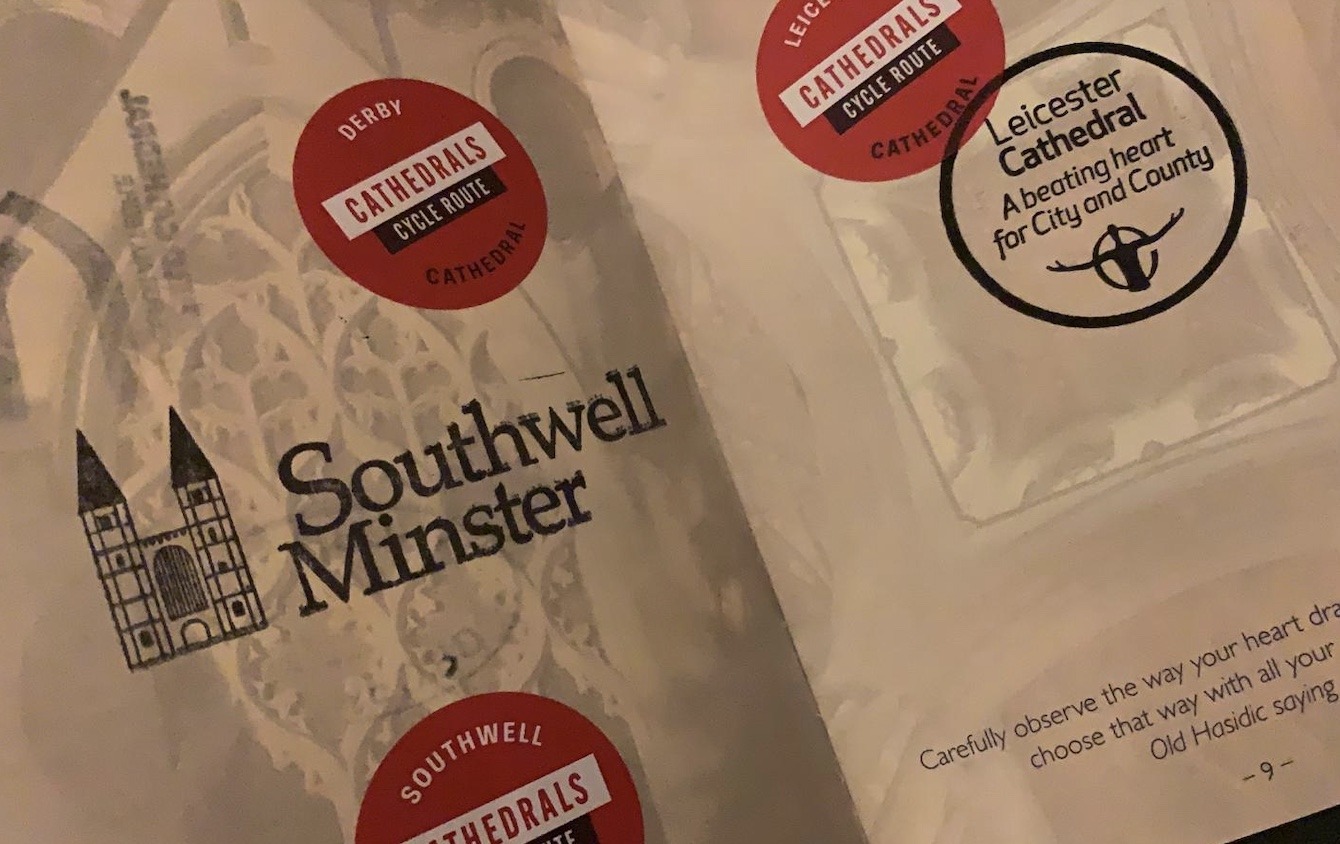 Next leg ridden today saw a team ride the 30 miles from Derby to Leicester.

Highlights
– slowly weaving through the crowds in Durham and tackling the short cobbled climb to Durham Cathedral
– Ice cream in York (courtesy of Cannon Micheal Smith) with the Ripon team in the shade of Minster
– Sandwich’s and cold drinks in the shade of the Deans garden with the Lincoln team – Southwell
– Screech of peregrine falcons at Lincoln cathedral
– Planning the next days logistics with a glass of french wine, eating Spanish tapas in the shadows of an English Cathedral – Lincoln
– Escorted through Nottingham by the Sheriff of Nottingham (former high Sheriff)
– Catching Evensong in Leicester just as we arrived from. The Derby journey.
– Coffee and cake in Durham Cathedral’s ancient cloisters.
– Live BBC interview on a bench in the grounds of Southwell cathedral…a nee experience
– Sharing stories on the road from Derby
– Seeing the CCR candles at so many cathedrals
– Meeting the Huub team in Derby and considering doing a stage in a Huub wetsuit for charity 🙂
– The ride through Clumber park
– The pride when I see Hannah’s sculpture displayed and welcomed in so many magnificent buildings

On a personal note
– I probably started to relax a little after York and really enjoyed the ride for York to Ripon…meeting Maurice and the Bradford team…and hearing the story behind the group of cyclist at Bradford was a huge highlight that made me feel it is very much worth the effort from everyone.

University of Bradford Student Development Leader Adam Tasker said:
“UBU have trained up a group of students who have never cycled before to join us on this ride. It will be a wonderful challenge”
An amazing group and achievement from Bradford..

The numerous stops that my fellow cyclists have made to help each other out and often help out other cyclist on the road. 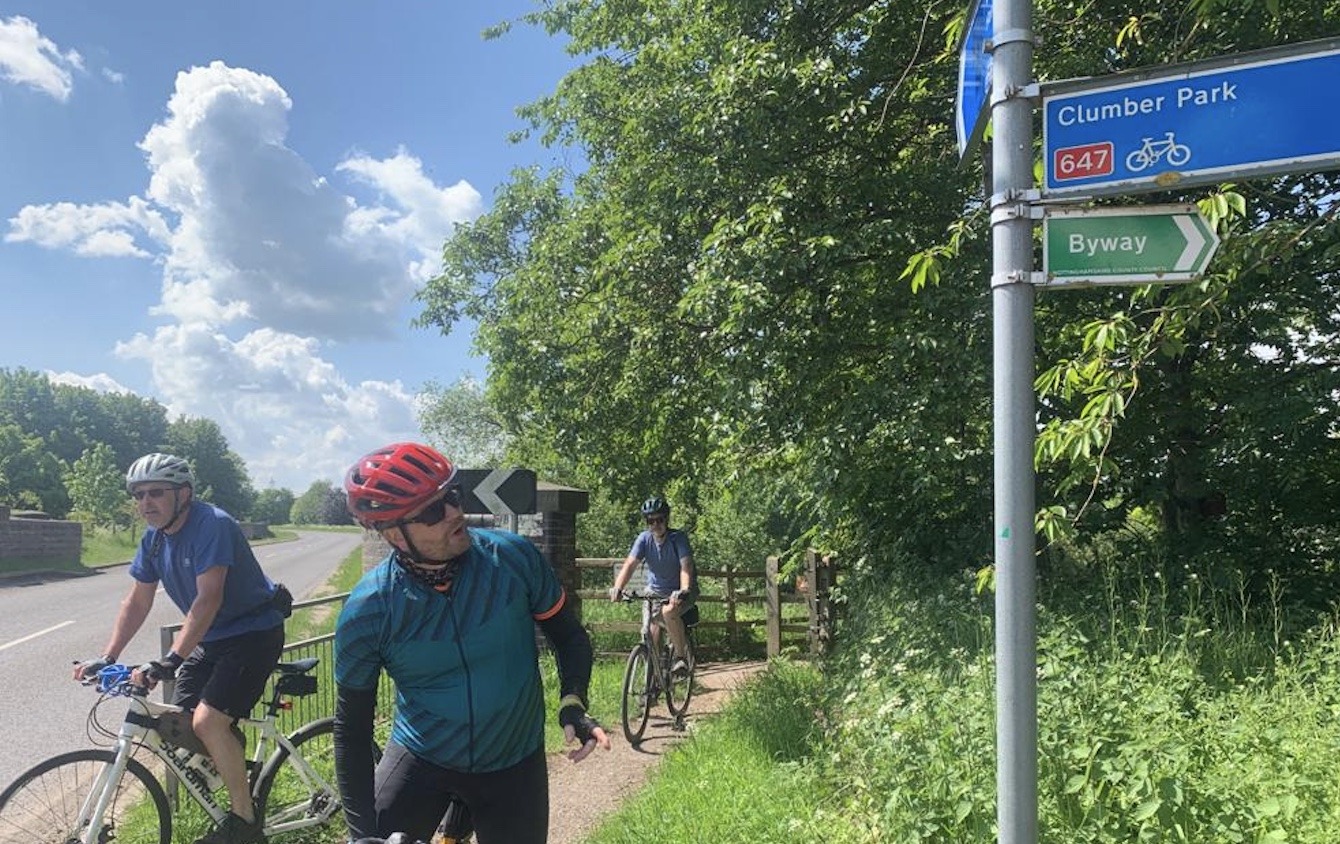 The huge achievement from Steve Walton what cycled from Sheffield to Lincoln got two pictures in Clumber park, handed the baton on to two team member who doubled back from Lincoln to help out and take the forward … Steve battled on and arrived in Lincoln 10 mins before his train back home departed … quick photo and straight to the train. 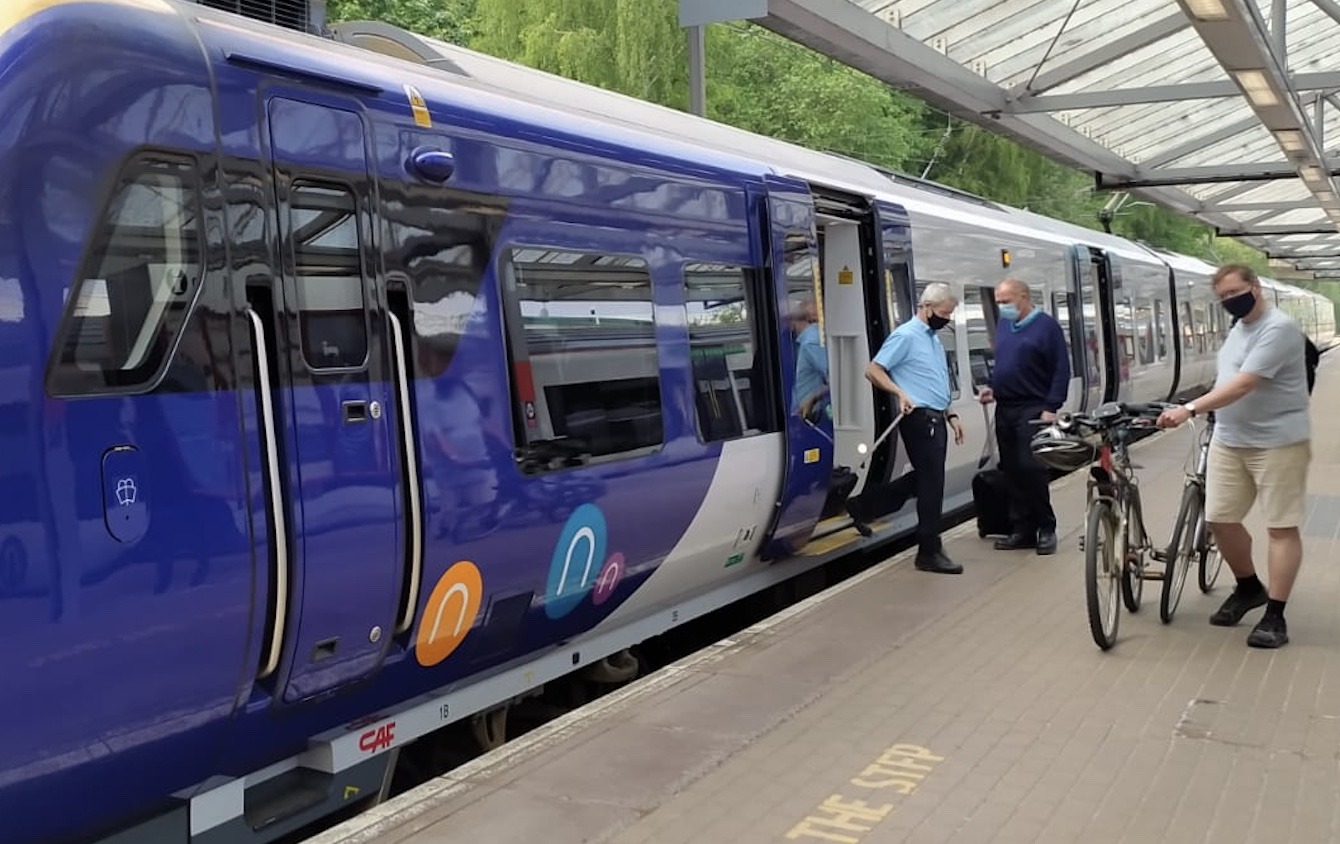 Unusual notes
– Having to be rescued from York YHA because I took a shower and left my key in the room…I had to lean out the window and ask a group of young lads on scooters to pop round to the reception and explain that a guest was stranded in shower with no means of getting back to the room without shocking the guests. The receptionist soon arrived with towel and spare key.
– Finding a set of car keys in the middle of road and locating the car in a drive not far away and returning the keys.