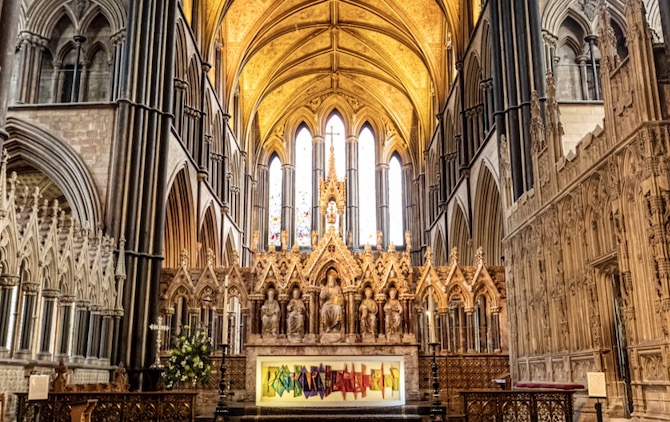 Worcester Cathedral dominates the city, more so than even the currently engorged and flooded River Severn it roars out of the river in a scene so captivating that it was the reverse of the £20 note until 2010, featuring Worcestershire composer Edward Elgar.

There is something quintessentially English about Worcester, every period of architecture can be found here in a building which makes for a fascinating study. For many visitors they will arrive from the motorway and come down the chaotic A44 which is a masterpiece in lousy town planning where the cathedral adopts a more subtle position, hiding behind the town with some marvellous trees in the grounds. If you come this way, park in the eccentric NCP cathedral car park, pro tip; park on the roof, you get a unique perspective of the Cathedral.

If you come this way, you’ll walk through a delightfully proportioned close towards the North Porch which on its own is stunning. When you get inside, you’ll get a warm welcome from one of the helpful guides.

When I visited in August, the furniture had been moved and it immediately gave an awe-inspiring sense of space and place. I cricked my neck and walked to the West End, the doors were open and I could see the river below. Standing taking in the vastness, I was drawn back to reality by a couple of New Zealand tourists, we walked forward together chatting about King John, buried in front of the altar. 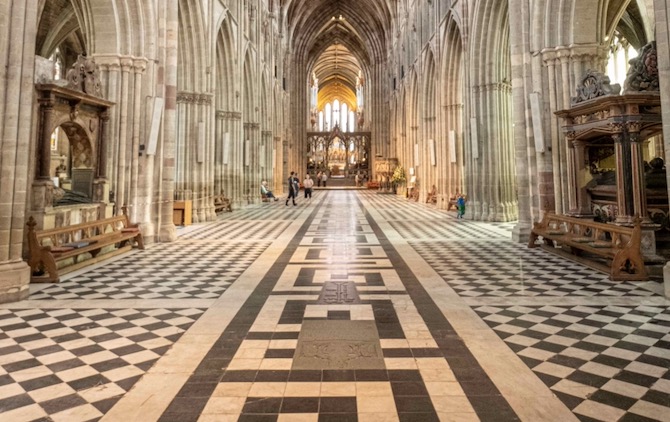 I saw where they were standing and said “You know Stanley Baldwin, our former Prime Minister is buried here too?”

They wanted to know where and I pointed to their feet. His grave is understated and like them, you might walk over it without noticing.

Worcester is one of those cathedrals that has everything, the cloisters are charming and also contain some of the old bells, the current ones are the fifth heaviest set in the world. Do have a look at the Chapter House, it is impressive and don’t miss the Norman crypt, which is a place of great peace

The Elgar window is appealing and his work is featured annually in the Three Choirs Festival which rotates triennially between Worcester, Hereford and Gloucester.

Marcus has already written about his visits to Truro, Blackburn Cathedral and Birmingham.